NASA-supported researchers have discovered the first known microorganism on Earth able to thrive and reproduce using the toxic chemical arsenic. The microorganism, which lives in California’s Mono Lake, substitutes arsenic for phosphorus in the backbone of its DNA and other cellular components.

“The definition of life has just expanded,” said Ed Weiler, NASA’s associate administrator for the Science Mission Directorate at the agency’s 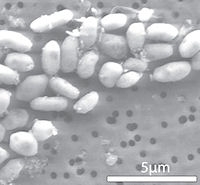 Headquarters in Washington. “As we pursue our efforts to seek signs of life in the solar system, we have to think more broadly, more diversely and consider life as we do not know it.”

The results of this study will inform ongoing research in many areas, including the study of Earth’s evolution, organic chemistry, biogeochemical cycles, disease mitigation and Earth system research. These findings also will open up new frontiers in microbiology and other areas of research.

“The idea of alternative biochemistries for life is common in science fiction,” said Carl Pilcher, director of the NASA Astrobiology Institute at the agency’s Ames Research Center in Moffett Field, Calif. “Until now a life form using arsenic as a building block was only theoretical, but now we know such life exists in Mono Lake.”

Link to a large image.

2 thoughts on “Discovery of Arsenic Microbe Announced at News Conference”