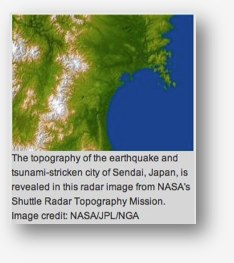 The March 11, magnitude 9.0 earthquake in Japan may have shortened the length of each Earth day and shifted its axis. But don’t worry—you won’t notice the difference.

Using a United States Geological Survey estimate for how the fault responsible for the earthquake slipped, research scientist Richard Gross of NASA’s Jet Propulsion Laboratory, Pasadena, Calif., applied a complex model to perform a preliminary theoretical calculation of how the Japan earthquake—the fifth largest since 1900—affected Earth’s rotation. His calculations indicate that by changing the distribution of Earth’s mass, the Japanese earthquake should have caused Earth to rotate a bit faster, shortening the length of the day by about 1.8 microseconds (a microsecond is one millionth of a second).

The calculations also show the Japan quake should have shifted the position of Earth’s figure axis (the axis about which Earth’s mass is balanced) by about 17 centimeters (6.5 inches), towards 133 degrees east longitude. Earth’s figure axis should not be confused with its north-south axis; they are offset by about 10 meters (about 33 feet). This shift in Earth’s figure axis will cause Earth to wobble a bit differently as it rotates, but it will not cause a shift of Earth’s axis in space—only external forces such as the gravitational attraction of the sun, moon and planets can do that.

Click here to read the full article.
View NASA images of the earthquake area at https://www.nasa.gov/topics/earth/features/japanquake/index.html