Skip to content
The NASA Explorer Schools project is adding 20 new teaching modules throughout the coming year to cover even more science, technology, engineering and mathematics topics across grades 4-12. NES will post the first set of new resources, focused on mathematics for algebra 1, algebra 2 and calculus classrooms later this summer. Other new content modules will focus on concepts in life science, physical science, engineering, chemistry and Earth science.
Be sure to check out all the exciting opportunities and classroom activities coming to the Virtual Campus. And remember, NES staff will be available throughout the summer to answer any questions or to provide additional support in integrating NES resources into your curriculum.
Have a wonderful summer!

The sun unleashed an M-2 (medium-sized) solar flare with a spectacular coronal mass ejection, or CME, on June 7, 2011. The large cloud of particles mushroomed up and fell back down looking as if it covered an area of almost half the solar surface.
NASA’s Solar Dynamic Observatory observed the flare’s peak at 1:41 a.m. EDT. SDO recorded these images in extreme ultraviolet light that show a very large eruption of cool gas. It is somewhat unique because at many places in the eruption there seems to be even cooler material — at temperatures less than 80,000° K.
When viewed in NASA’s Solar and and Heliospheric Observatory’s coronagraphs, the event shows bright plasma and high-energy particles roaring from the sun. This Earth-directed CME is moving at 1,400 km/s according to NASA models. Due to its angle, however, effects on Earth should be fairly small. Nevertheless, it may generate space weather effects such as aurora here on Earth in a few days.
To see videos of the CME visit the Solar Dynamic Observatory website.

We are just two weeks away from the close of the NASA Explorer Schools 2010-2011 school year. On June 30, the Virtual Campus will close for a two-week summer recess to update the website and add new resources for the coming year.
At this time, we would like to remind you to enroll for the 2011-2012 school year. The enrollment process will ensure a seamless transition to the next NES school year, granting you continued access to exclusive NASA educational resources and a log of your NES activities from the previous year.
If you have any questions regarding the enrollment process or the 2011-2012 NES school year, please contact the NES Help Desk.
We hope you’ll join us for the 2011-2012 school year. Log on and enroll today.

NASA’s two Gravity Recovery And Interior Laboratory, or GRAIL, spacecraft have completed all assembly and testing prior to shipment to Florida.
The GRAIL mission is scheduled for launch from NASA’s Kennedy Space Center in Florida late this summer. The GRAIL-A and GRAIL-B spacecraft will fly in tandem orbits around Earth’s moon for several months to measure its gravity field in unprecedented detail. The mission also will answer longstanding questions about the moon and provide scientists with a better understanding of how Earth and other rocky planets in the solar system formed.
To read more about the GRAIL mission, go to the GRAIL article in NEON.
This story directly relates to On the Moon Educator’s Guide: On Target and Feel the Heat content modules, available on the NASA Explorer Schools Virtual Campus.
GRAIL also carries MoonKAM, a unique and exciting activity for middle school students, hosted by Sally Ride Science. Read the NES Teachers Corner article about getting your students involved in MoonKam.

NASA’s Voyager probes are truly going where no one has gone before. Gliding silently toward the stars, 9 billion miles from Earth, they are beaming back news from the most distant, unexplored reaches of the solar system.
Mission scientists say the probes have just sent back some very big news indeed.
It’s bubbly out there.
According to computer models, the bubbles are large, about 100 million miles wide, so it would take the speedy probes weeks to cross just one of them. Voyager 1 entered the “foam-zone” around 2007, and Voyager 2 followed about a year later. At first researchers didn’t understand what the Voyagers were sensing–but now they have a good idea.
Author: Dr. Tony Phillips | Credit: Science@NASA

Read more about this amazing discovery at Science@NASA or watch the video on YouTube.

In this episode, Kurt Sacksteder, Chief of the Space Environments and Experiments Branch at NASA’s Glenn Research Center talks about the importance of water on other planets and the tools being developed to mine water from Martian soil. NASA is working with a Canadian mining and space technology company to test designs for excavating natural resources from the surface of planets like Mars. They take measurements of forces applied to excavation devices, the traction of evacuation vehicles and even the flow of sand during simulated digs.

Watch a preview of this episode below. Previews of other NASA Now episodes are on the NASA Explorer Schools channel on YouTube.

“Weather or Not” is a lesson based on predicting the weather. Students download current Earth weather images taken by various NASA and NOAA satellites, interpret the images, and make local forecasts. This website is an excellent resource for real-time satellite imagery and archived weather and satellite data.
To find out more about the lesson “Weather or Not,” read through the “Exploring the Environment” article in NEON. 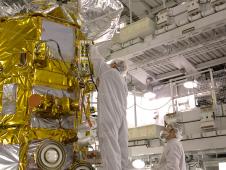 On day 4 of the STS-134 mission, the Alpha Magnetic Spectrometer-2, or AMS, was installed successfully on the outside of the International Space Station. Mission Specialists Andrew Feustel and Roberto Vittori used the space shuttle’s robotic arm to extract it from Endeavour’s payload bay. The AMS will search for clues about the origin of dark matter and the existence of antimatter and other unusual matter.
This story is an exciting update directly relating to NASA Now: Search for Antimatter. In this program, Trent Martin, project manager for the AMS experiment at NASA’s Johnson Space Center in Houston, explains how NASA is trying to answer one of the fundamental questions in modern physics: “What happened to the primordial antimatter?”
After watching NASA Now: Search for Antimatter (requires log-in), read more about the installation of the AMS on the International Space Station in the article in NEON.

Here is a great student activity for the springtime — have your students construct and launch a soda bottle rocket. This fun but highly educational activity demonstrates Newton’s Laws of Motion. Find out about other ways you can challenge your students by doing some of the other extensions to the Lunar Nautics module.
To find out more about this and other Lunar Nautics lessons, read the article in NEON.
Link to the NES Virtual Campus home page.