Preview of this program 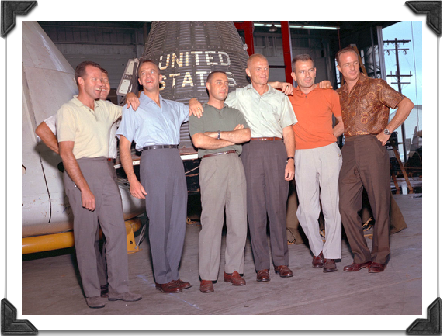 NASA commemoration of 50 years of Americans in orbit begins today with an interactive feature on http://1.usa.gov/wkFMVw.

Initiated in 1958, completed in 1963, Project Mercury was the United States’ first man-in-space program. The objectives of the program, which made six manned flights from 1961 to 1963, were specific:
•  To orbit a manned spacecraft around Earth
•  To investigate man’s ability to function in space
•  To recover both man and spacecraft safely
Missions:
1. Alan Shepard – Freedom 7
2. Gus Grissom – Liberty Bell 7
3. John Glenn – Friendship 7
4. Scott Carpenter – Aurora 7
5. Wally Schirra – Sigma 7
6. Gordon Cooper – Faith 7

NASA Explorer Schools Educator Joan Labay-Marquez from Curington Elementary had her fourth-grade students construct a robotlike hand out of cardboard to apply what they have learned about the engineering design process.

This activity fit the school district’s curriculum of teaching about inventors, inventions and the engineering design process.As an extension activity, the students will design and build a “mock” wing of the International Space Station laboratory in their classroom. To demonstrate what they have learned about the engineering design process and how NASA uses robotics in space, the students will include a model robotic hand in the lab.
Watch the video of NASA’s Robonaut at https://www.nasa.gov/multimedia/videogallery/index.html?media_id=11952672.
Find the hand activity at https://www.nasa.gov/audience/foreducators/topnav/materials/listbytype/I_Want_to_Hold_Your_Hand.html.
For more exciting engineering design challenges, visit the Lesson Library on the NASA Explorer Schools Virtual Campus website.

NASA’s Associate Administrator for Education and two-time space shuttle astronaut Leland Melvin’s Black History Month message reflects on space-related milestones of the past and challenges viewers to use their talents to inspire today’s youth to future achievement.

This artist’s illustration gives an impression of how common planets are around the stars in the Milky Way galaxy.
Link to full-size image and caption.
The Milky Way galaxy contains a minimum of 100 billion planets, according to a detailed statistical study based on the detection of three exoplanets. “Exoplanets” are planets located outside our solar system.
The discovery, reported in the Jan. 12 issue of Nature, was made by an international team of astronomers, including co-author Stephen Kane of NASA’s Exoplanet Science Institute at the California Institute of Technology in Pasadena, Calif.
The survey results show that our galaxy contains, on average, a minimum of one planet for every star. This means that it’s likely a minimum of 1,500 planets is within just 50 light-years of Earth.The study is based on observations taken over six years by the PLANET (Probing Lensing Anomalies NETwork) collaboration, using a technique called microlensing to survey the galaxy for planets. With this technique, one star acts like a magnifying lens to brighten the light from a background star. If planets are orbiting the foreground star, the background star’s light will further brighten, revealing the presence of a planet that is otherwise too faint to be seen.
The study also concludes that there are far more Earth-sized planets than bloated Jupiter-sized worlds. A rough estimate from this survey would point to the existence of more than 10 billion terrestrial planets across our galaxy.
“Results from the three main techniques of planet detection, including microlensing, are rapidly converging to a common result: Not only are planets common in the galaxy, but there are more small planets than large ones,” said Stephen Kane, a co-author from NASA’s Exoplanet Science Institute at Caltech. “This is encouraging news for investigations into habitable planets.”
Read the full story at http://hubblesite.org/newscenter/archive/releases/2012/07.
This study is directly related to the NASA Explorer Schools featured lesson, Algebraic Equations: Transit Tracks — Finding Habitable Planets. During this activity, students analyze real light curve data from NASA’s Kepler mission. The students then use algebra to calculate the size of planets and their distance from their “sun” to discover if the planets lie in the “habitable zone.” 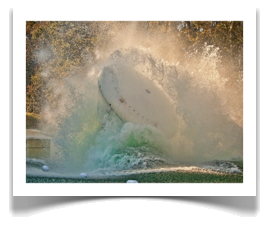 On Jan. 6, after six months of testing, an 8,165-kilogram (18,000-pound) Orion mock-up took its final splash into the Hydro Impact Basin of NASA’s Langley Research Center in Virginia.
For more information about the Hydro Impact Basin testing, log in to the NES Virtual Campus and watch the NASA Now program, Forces and Motion: Landing and Impact Research Facility.

As NASA prepares Orion to take astronauts farther into space, have your students take a look back at the recently ended shuttle program by having them do the NES featured lesson, Linear Regression: Exploring Space Through Math — Space Shuttle Ascent. In this lesson, students track the linear regression of a space shuttle launch and create a scatter plot from real launch data.

In the Weather and Climate: Satellite Meteorology lesson, students learn how to use real-time satellite data provided by Geostationary Operational Environmental Satellites. GOES helps scientists uncover the secrets of how hurricanes form, travel, strengthen and, ultimately, how they impact us all. 2011 was an especially active year for tropical storms. Enhance your meteorology lessons with GOES videos featuring the 19 tropical cyclones that formed in the 2011 hurricane season.

Students of NASA Explorer Schools educator Dennis Hagen-Smith from Toluca Lake Elementary School completed the Balloon Rocket Experiment from the lesson Newton’s Laws of Motion: Lunar Nautics. This activity is a simple demonstration of rocket staging first proposed by Johann Schmidlap in the 16th century. Hagen-Smith’s students learned how rockets achieve greater distances through staging. They also found out that it takes an enormous amount of energy to boost an object into space.

Students were excited to see their balloon rockets move along the tether across the room as they recorded data from each group’s experimental design. As a follow-up extension activity linking social studies, students created timelines showing rocket development.
Check out the pictures from this lesson in the Balloon Rocket Experiment entry in the Lunar Nautics forum in the NASA Educators Online Network, or NEON.