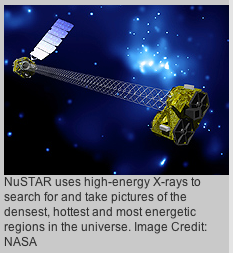 NASA’s Nuclear Spectroscopic Telescope Array, or NuSTAR, has snapped its first test images of the sizzling high-energy X-ray universe. The observatory, launched June 13, is the first space telescope with the ability to focus high-energy X-rays — the same kind used by doctors and dentists — into crisp images.

Soon, the mission will begin its exploration of hidden black holes; fiery cinder balls left over from star explosions; and other sites of extreme physics in our cosmos.

“Today, we obtained the first-ever focused images of the high-energy X-ray universe,” said Fiona Harrison, the mission’s principal investigator at the California Institute of Technology in Pasadena, who first conceived of NuSTAR about 15 years ago. “It’s like putting on a new pair of glasses and seeing aspects of the world around us clearly for the first time.”

The story about NuSTAR in orbit is a great extension for NASA Now: Electromagnetic Spectrum: NuSTAR. To access this episode of NASA Now, first log into the NASA Explorer Schools Virtual Campus.