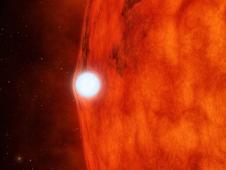 NASA’s Kepler space telescope has witnessed the effects of a dead star bending the light of its companion star. The findings are among the first detections of this phenomenon — a result of Einstein’s theory of general relativity — in binary star systems.

The dead star, called a white dwarf, is the burnt-out core of what used to be a star like our sun. It is locked in an orbiting dance with its partner, a small “red dwarf” star. While the tiny white dwarf is physically smaller than the red dwarf, it is more massive.

To read more about this discovery and see an animation of the phenomenon, visit https://www.nasa.gov/mission_pages/kepler/news/kepler20130404.html.