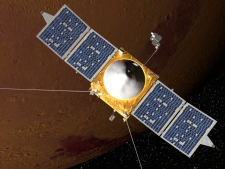 If you missed out on the opportunity to send your name to Mars as part of the Curiosity mission (see the NES Teachers Corner article, Want to go to Mar? Here’s Your Chance) here’s a second opportunity.

NASA is inviting members of the public to submit their names and a personal message online for a DVD to be carried aboard a spacecraft that will study the Martian upper atmosphere.

The DVD will be in NASA’s Mars Atmosphere and Volatile Evolution, or MAVEN, spacecraft, which is scheduled for launch in November, 2013. The DVD is part of the mission’s Going to Mars Campaign coordinated at the University of Colorado at Boulder’s Laboratory for Atmospheric and Space Physics.

The DVD will carry every name submitted. The public also is encouraged to submit a message in the form of a three-line poem, or haiku. However, only three haikus will be selected. The deadline for all submissions is July 1, 2013. An online public vote to determine the top three messages to be placed on the DVD will begin July 15, 2013.

To read more about this opportunity, visit https://www.nasa.gov/home/hqnews/2013/may/HQ_13-125_MAVEN_Name_to_Mars.html.