Middle school educators are invited to join NASA for the International Space Station EarthKAM Winter 2013 Mission from Jan. 29 – Feb. 1, 2013. Guide your students in hands-on research as they program cameras aboard the space station to take pictures of specific locations on Earth.

If you’re new to EarthKAM or if you registered for a past mission but weren’t sure how to navigate the website and request images, you can sign-up to attend a 30-minute online EarthKAM information session.

For more information about EarthKAM and to register for the upcoming mission, visit the EarthKAM home page.

If you have questions about the EarthKAM project, email ek-help@earthkam.ucsd.edu.

In 2010, President Barack Obama set the agency on a course to provide new transportation into space for its astronauts, while expanding human presence beyond low Earth orbit and enabling new missions of exploration across the solar system.

NASA’s Commercial Crew Program was formed to facilitate the development of a U.S. commercial crew space transportation capability with the goal of achieving safe, reliable and cost-effective access to and from the International Space Station and low Earth orbit.

This educational video highlights some of the challenges faced by humans on space exploration missions and the technologies needed for living away from the Earth. Intended for grades 3-8, and for anyone curious about space exploration.

Recently, an air pressurized paper rocket launcher being used by an educator failed. This launcher is described in NASA’s Rockets Educator Guide, publications EG-2011-11-223-KSC, pp. 86-90 and EG-2008-05-060-KSC, pp. 86-90. NASA completed an engineering investigation into the failure and determined that the launcher, or design equivalents, should not be used. NASA has removed the launcher design from its website and its education curriculum. Individuals and organizations should immediately discontinue use of the launcher published in the referenced NASA publications. The point of contact for additional information is James Stofan, Deputy Associate Administrator for Education Integration at nasaedpartners@nasa.gov. We request that your organization assist NASA in disseminating this information as widely as possible throughout the education community.

NASA’s Associate Administrator for Education and two-time space shuttle astronaut Leland Melvin’s Black History Month message reflects on space-related milestones of the past and challenges viewers to use their talents to inspire today’s youth to future achievement.

Surprising but true: Every day, on average, more than 40 tons of meteoroids strike our planet. Most are tiny specks of comet dust that disintegrate harmlessly high up in Earth’s atmosphere, producing a slow drizzle of meteors in the night sky. Bigger chunks of asteroid and comet debris yield dozens of nightly fireballs around the globe. Some are large enough to pepper the ground with actual meteorites.

With so much “stuff” zeroing in on our planet, NASA could use some help keeping track of it all.
Enter the Meteor Counter–a new iPhone app designed to harness the power of citizen scientists to keep track of meteoroids.The app is available free of charge in Apple’s app store. Just click on the link in the previous sentence or search for Meteor Counter in the app store, and let the observing begin. 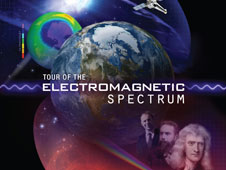 This resource presents the electromagnetic spectrum by introducing how we interact with these waves on a daily basis and how NASA scientists use the unique qualities of each wavelength to study the sun, planets and origins of the universe. EM waves measured by Earth-observing satellites help NASA scientists understand our Earth system and changing global patterns and climate.

For more information and links to the education materials, visit https://www.nasa.gov/audience/foreducators/tour_EMS.html

NASA is seeking formal and informal educational organizations, individually or working together, to host a live, in-flight education downlink during Expeditions 31 and 32 (approximately from March 2012 to September 2012). To maximize these downlink opportunities, NASA is looking for organizations that will draw large numbers of participants and integrate the downlink into a well-developed education plan.
The deadline to submit a proposal is Dec. 21, 2011. 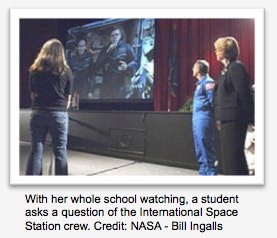 During Expeditions 31 and 32, crew members aboard the International Space Station will participate in downlinks. Downlinks are approximately 20 minutes in length and allow students and educators to interact with astronauts through a question and answer session. Downlinks afford education audiences the opportunity to learn firsthand from astronauts what it is like to live and work in space. Downlinks are broadcast live on NASA TV and are streamed on the NASA website. Because of the nature of human spaceflight, organizations must demonstrate the flexibility to accommodate changes in downlink dates and times.
Interested organizations should contact Teaching From Space, a NASA Education office, to obtain information related to expectations, format, audience, guidelines and forms by sending an email to JSC-Teaching-From-Space@mail.nasa.gov or calling 281-244-7608.
To learn more about this opportunity, visit https://www.nasa.gov/audience/foreducators/teachingfromspace/students/downlinks.html.
Link to the NES Virtual Campus home page.