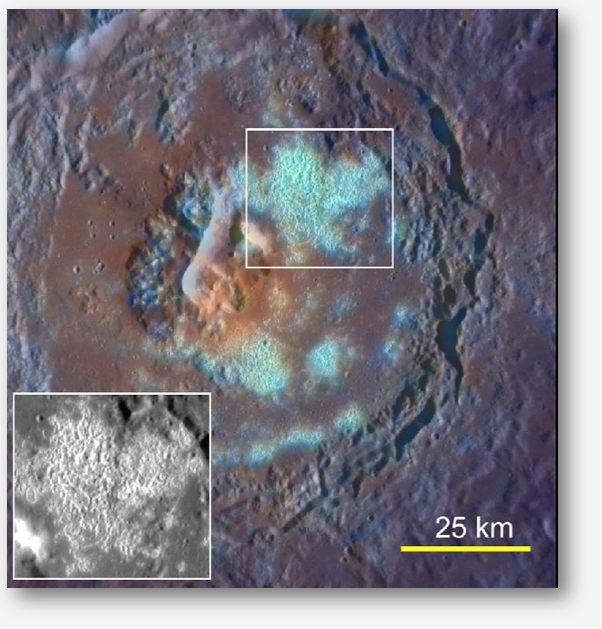 After only six months in orbit around Mercury, NASA’s MESSENGER spacecraft is sending back information revolutionizing the way scientists think about the innermost planet. Analysis of data from the spacecraft shows, among other things, evidence of widespread flood volcanism; the first close-up views of Mercury’s “hollows”; the first direct measurements of the chemical composition of Mercury’s surface; and the first global inventory of plasma ions within Mercury’s space environment.
This update provides current information for the Heat, Temperature and Energy: MESSENGER — Cooling With Sunshades lesson on the NASA Explorer Schools Virtual Campus.
To read more about this amazing mission and discovery, visit either Facebook or NEON.
Link to the NES Virtual Campus home page.

The 50th anniversary of America’s first manned spaceflight is being commemorated with the issuance of two stamps. The stamps went on sale May 4, 2011.
One stamp salutes NASA’s Project Mercury, America’s first manned spaceflight program, and NASA astronaut Alan Shepard’s historic flight on May 5, 1961, aboard the spacecraft Freedom 7.
The other stamp draws attention to NASA’s unmanned MESSENGER mission, a scientific investigation of the planet Mercury. On March 18, 2011, MESSENGER became the first spacecraft to enter into orbit around Mercury.
These two historic missions frame a remarkable fifty-year period in which America has advanced space exploration through more than 1,500 manned and unmanned flights.
Donato Giancola of Brooklyn, N.Y., who based the stamps on NASA photos and images, designed both stamps.
The release of the MESSENGER stamp is related to the NASA Explorer Schools content module, MESSENGER: Cooling with Sunshades. To learn more about the MESSENGER stamp, go to the article in NEON.
To use the MESSENGER: Cooling With Sunshades lesson and activity in your classroom, log into the NES Virtual Campus and click on the Teaching Materials button in the left column. The activity is an engaging, hands-on lesson covering physics concepts including temperature, latent heat, state of matter and transfer of energy.

NASA will host a news conference at 1 p.m. EDT on Thursday, June 16, to reveal new images and science findings from the first spacecraft to orbit Mercury. The event will be held in the NASA Headquarters. NASA Television and the agency’s website will broadcast the event.
NASA’s MErcury Surface, Space ENvironment, GEochemistry, and Ranging, or MESSENGER spacecraft conducted more than a dozen laps through the inner solar system for six years prior to achieving the historic orbit insertion on March 17.
This news conference connects the NASA MESSENGER mission to the MESSENGER content modules on the NASA Explorer Schools Virtual Campus.
Be sure to watch this exciting news conference and see the new information the MESSENGER satellite is bringing us.
To read more about this amazing mission, visit: http://neon.intronetworks.com/#Forum/forum/2/1335/158/888

This is a cool lesson related to MESSENGER’s mission to Mercury and the Inuit people inhabiting the Arctic region. By studying ancient solutions to the issue of excessive sunlight on human vision, students better understand the process of designing solutions to similar problems for MESSENGER.
Students measure their field-of-view then make snow goggles similar to those used by ancient Inuit hunters and determine changes in their field-of-view. Check out this lesson and have a classroom discussion on how MESSENGER uses similar approaches to limit its exposure to intense sunlight as it orbits Mercury.
Read the NEON article to find out more about the lesson ‘Snow Goggles and Limiting Sunlight.’

In this episode of NASA Now, Dr. Larry Evans, Senior Scientist for MESSENGER, discusses the difficulty of getting to Mercury, the challenges of visiting a planet so close to the sun and what we hope to discover when the spacecraft gets there.
The planet Mercury has long been a mystery to us. In 1975, NASA sent Mariner 10 to do flybys of Mercury and take images of the surface. This mission gathered images of only half the planet. This was the first and last mission NASA would make to Mercury until MESSENGER.

Is ice on Mercury? Why is Mercury so dense? What is Mercury’s geologic history? What is the nature of Mercury’s magnetic field? MESSENGER is equipped with seven scientific instruments that aim to answer these questions and more.