How do NASA scientists use geometry and measurement to predict the behavior of dangerous solar storms?

Use the problems in the NES featured lesson, Geometry: Space Math Problems — Solar Storms, to bring relevance to your classroom by connecting your lesson to recent solar activity. In these problems, students analyze images of a solar tsunami and use geometry and measurement skills to find the speed of the wave. They step into the shoes of a NASA scientist and use geometry to find the speed of a coronal mass ejection, or CME, also known as a solar storm. CMEs can have hazardous effects on the International Space Station and astronauts.

To see how you can use Space Math Problems with your students, take a look at the NES video collection for teachers.
The solar flare (upper-left) on 7 March 2012 seen by the SWAP
instrument on ESA’s Proba-2 satellite.

The Moderate Resolution Imaging Spectroradiometer, or MODIS, on NASA’s Aqua satellite and the MODIS sensor on NASA’s Terra satellite took photos of Japan’s earthquake and tsunami. Images were made with infrared and visible light to highlight the presence of water and other features on the ground.
To find out more about the images, read the article in NEON.

Urban heat islands are urban areas that are hotter than surrounding rural areas. New research shows the summer land surface temperatures of cities in the northeastern United States were an average of 7° to 9° Celsius warmer than surrounding rural areas over a three-year period. The complex phenomenon that drives temperatures up is called the urban heat island effect. But thanks to satellites, scientists are making progress in understanding the effect. Satellite data have been used to compare various urban settings.
Find out what the researchers from NASA’s Goddard Space Flight Center in Greenbelt, Md., are reporting on the urban heat islands in the article in NEON.

NASA Explorer Schools educator Haia Spiegel, a teacher at the Greater Hartford Academy for Mathematics and Science, created an inquiry-based activity called Ratio of Snow to Water after attending a Ice and Snow presentation at last year’s NES Winter’s Story research experience.
Students analyze the layers of a snow pack and look at the individual snow crystals. Based on their analysis, they then calculate the ratio of snow to water. This is a way to connect science and mathematics.
You will find this activity in NEON in the Satellite Meteorology forum including a PowerPoint presentation.

Teachers, if you are looking for a way to demonstrate Newton’s Laws of Motion in a NASA context, the NASA Explorer Schools module Lunar Nautics may be just what you’re hoping to find. The three featured activities in this module focus on a real-world understanding of Newton’s laws. In the activity Rocket Staging: Balloon Staging, students learn how rockets achieve greater distances through rocket staging. The Lunar Landing: Swinging Tray activity shows students how gravity is responsible for keeping satellites in orbit. The purpose of Lunar Base Supply Egg Drop is for student teams to design a method of packaging “supplies” and getting them safely to a “lunar base.”
Share your experiences with these three modules by posting on NEON. Register, log in, join the NASA Explorer Schools group and find the forum Lunar Nautics –Designing a Mission for Living and Working on the Moon. In your post, be sure to include your students’ problem-solving techniques for the design challenge and pictures.

Here’s an extension activity from the MY NASA DATA project that you might want to use in your meteorology class. In the lesson Tropical Atlantic Aerosols, students use real satellite data to determine where the greatest concentrations of aerosols are located during the course of a year in the tropical Atlantic region and their source of origin. They explore data and draw conclusions about aerosol transport and learn about the radiation budget’s effects of aerosols.

For more information about this activity, go to NEON. Register, log in and join the NASA Explorer Schools group. The MY NASA DATA: Tropical Atlantic Aerosols activity is posted in the Satellite Meteorology forum. 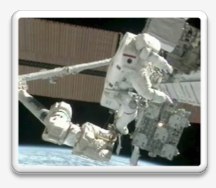 In the Water Vapor Satellite Imagery lessons, your meteorology students learn how to identify and analyze jet streams using water vapor imagery from weather satellites. There is a jet stream tutorial if you need a better understanding of “jet stream.” Then your students can complete each of the learning scenarios in the order listed below.

Read more about these activities in NEON. Register, log in, and join the NASA Explorer Schools group and Satellite Meteorology forum. The complete write-up on the lessons is available in that forum.

In this episode of NASA Now, George Hatcher, guidance, navigation and controls engineer at Kennedy Space Center, explains why the upcoming launch of the space shuttle Discovery is mind-boggling from a physics perspective, even for a guidance, navigation and flight controls engineer. He will speak about the extreme accelerations and velocities involved in launching a spacecraft from Earth to orbit and return.

After 38 missions to date, and more than 5,600 trips around Earth, Discovery has flown more missions than any other shuttle — more than any other spacecraft. At the conclusion of STS-133, 180 people will have flown aboard Discovery, including the first female shuttle pilot and the first female shuttle commander, who happen to be the same person — Eileen Collins; the first African-American spacewalker, Bernard Harris; and the first sitting member of congress to fly in space, Jake Garn. Discovery will be the first of the shuttle fleet to retire.

(Click on the video window below and then press your spacebar to start/stop the video.)