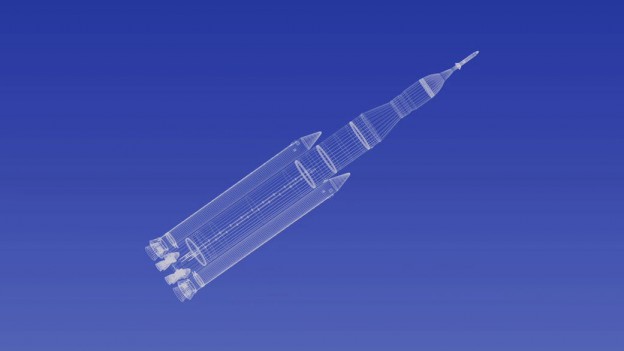 Let’s say you need to build a new rocket. Where do you start?

Well, what kind of rocket are you going to create? All rockets, after all, are not created equal – the world is full of a variety of rockets, all designed for different purposes.

Step One: Know What Your Rocket Needs to Do.
In order to know what kind of rocket you’re going to build, you need to know its requirements.

For the sake of this hypothetical example, let’s say the new rocket you need to build is to be designed for the purpose of human exploration of deep space. Specifically, it’s going to be the rocket that will enable human missions to Mars, far and away the most ambitious task ever undertaken in spaceflight history. A bold mission requires a bold rocket.

Step Two: Establish Mission Parameters.
Over history, there have been numerous studies of how to get to Mars, so you take the best data you can get and figure out what it takes to execute those missions. The general thinking is that you’re going to need multiple launches to carry out the mission, but even with multiple launches, there are going to be some really big pieces. You’re going to have to be able to lift at least 130 metric tons of stuff (a.k.a. payload) into Earth orbit. Many engineers think your lander may measure up to 30 feet across, so you need a payload volume big enough to carry it.

Step Three: Call in Experts.
You work with other rocket designers, in both the government and commercial spaceflight worlds. You listen to a lot of ideas. And I mean, a LOT of ideas.

Step Four: Start Drawing.
You start creating rocket designs. You work from a blank sheet of paper. In fact, you get a lot of blank sheets of paper. Reams of paper, really.

Step Five: Whittle Down the Possibilities.
The challenge, it turns out, is not to design a rocket capable of supporting human missions to Mars. The challenge is designing the BEST rocket for the mission.

And the real challenge of doing that is knowing which rocket is best. What’s the standard for “bestness” in a Mars rocket? It’s a more complex question than it might sound – it’s vital, for example, that the rocket be powerful, but the best rocket is not the one that’s most powerful. Once you have enough power, more power makes less difference.

As you probably guessed, this question is not completely hypothetical; four years ago, this exact scenario led to the birth of Space Launch System. Engineers were tasked with designing the 130-metric-ton Mars rocket described above. They called in government and industry experts. They reviewed more than 1,000 possible designs for the vehicle.

In the case of the SLS, some concepts were easy to reject: there were clearly better choices, for example, than the rocket that was too wide to fit out of the giant doors of the Vehicle Assembly Building at Kennedy Space Center.

Three stood out – a Saturn-like large, multi-stage rocket, using the kerosene fuel that powered the moon rocket instead of the shuttle’s liquid hydrogen; a rocket built from components based on current smaller rockets, taking advantage of industry successes; and a design that would be an evolutionary step from systems used on the space shuttle. But which was best?

External constraints had to be considered – in addition to the guideline that the rocket had to support human deep space exploration, national policy said it had to use, where possible, resources from the then-about-to-end shuttle program and earlier Constellation development effort. Any of the designs could have met this guideline; NASA worked to pick the design, and then identify existing resources that could facilitate its development.

NASA chose three additional standards to measure the rockets – any qualified design would be judged by how well it met standards of safety, affordability and sustainability.

Each of the three had strengths and weaknesses; engineers studied and debated the pros and cons of each. Ultimately, while the Saturn-like rocket was a good design, the time and cost needed to design, build, and launch it was too great. The smaller-rocket-derived design, in contrast, offered development advantages over the kerosene vehicle since the existing hardware and support systems provided a head start, but its complexity counted against it in the safety measurement. If you don’t have a barge, you can get the same effect by strapping a whole lot of rowboats together, but it’s not going to be the same.

The remaining design, based on a combination of upgrades to shuttle systems and new developments, provided advantages in shortening development time and reducing costs, and offering safety advantages through the use of proven propulsion systems.

Step Six: Pick the Best Design.
And so from the thousands, one remained — the design that could not only carry out the mission to Mars, but could do so most safely, affordably and sustainably.

The lengthy journey to the launch pad had begun.

Next Time: Just What Is An SLS, Anyway?