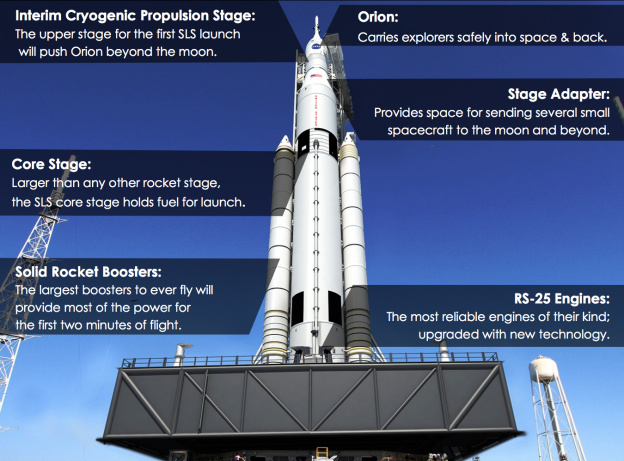 For those lucky enough to be at or near Kennedy Space Center when a Space Launch System rocket leaves Earth for the first time, it will be an unforgettable experience.

Any rocket launch is amazing to witness in person, but the rise of a truly powerful launch vehicle, like the space shuttle or the Saturn V, is a different thing altogether. It’s not merely impressive; it’s visceral. It’s not something you witness; it’s something you experience, a brightness that seems like the sky has split open, a sound that you hear with your entire body, a power that passes into and through you.

And for all the reasons that shuttle and Saturn V launches were in a different class, that first launch of SLS will be unprecedented; the power emanating from the vehicle, through the air and ground and into its audience measurably greater than either of those forbearers.

That unparalleled power will initiate an unparalleled mission – propelling the Orion spacecraft behind the moon, farther than any Apollo capsule ever ventured, proving that the system is ready to allow human beings to once more travel beyond low Earth orbit for the first time in decades.

That rocket, the first flight unit to come off the line, is already under construction. Today, large portions of that very vehicle can be found at NASA locations in three states.

At Stennis Space Center in southwest Mississippi, engines for that first flight, and the next three after it, are already in inventory. The RS-25 engines were formerly better known as the Space Shuttle Main Engine, and at the end of the shuttle program, 16 of its engines were transferred to the SLS program. While the shuttle used three of the engines per flight, SLS will use four; one of the ways the rocket is generating greater power than shuttle. Engine tests are being conducted now to check out improvements made to the engines since they last flew.

At Michoud Assembly Facility outside New Orleans, the core stage of the first vehicle is being built. At one point, Michoud covered more square footage than any building in the country – 43 acres under one roof – and today large rooms are filled with rocket hardware. Barrels, rings and domes, 27.6 feet across, are coming off of welding machines and being stored awaiting the day they will be assembled together into fuel tanks. (For the test articles, that day will be this fall.) The SLS core will be the world’s largest rocket stage, and standing in front of those welded segments gives you a sense of just how big that is.

At Kennedy Space Center in Florida, a large warehouse holds booster hardware for the first flight. As with the engines, the boosters for the first SLS flights are being repurposed and upgraded from the space shuttle program. The large white solid rocket boosters on the sides of the shuttle were actually a stack of multiple segments, with the four in the middle holding the propellant. The SLS boosters will be stacked with five propellant segments, also giving the rocket more power.

Other elements of the vehicle are still yet to be built. The upper stage for the first vehicle will begin construction this summer at a United Launch Alliance facility in Decatur, Alabama. The upper stage is a modified version of the upper stage used on the Delta IV Heavy rocket that launched Orion on Exploration Flight Test-1 in December 2014. (Later flights will use a more powerful upper stage, just as the shuttle-derived boosters will eventually be replaced with more powerful boosters, making SLS more capability even than the Saturn V that carried men to the moon.)

When all of these elements are completed, they will be transported to Kennedy Space Center for final assembly of the full rocket in the Vehicle Assembly Building. The entire SLS-Orion stack will tower 322 feet tall, and, when fueled, weigh more than five and a half million pounds.

At launch, the rocket will generate 8.4 million pounds of thrust, and have the power to launch more than 70 metric tons of payload into Earth orbit… or to send Orion farther into space than humans have ever ventured.

…And, of course, to give the Florida space coast a show like it’s never before seen.

Next Time: Hey, How’s It Going?