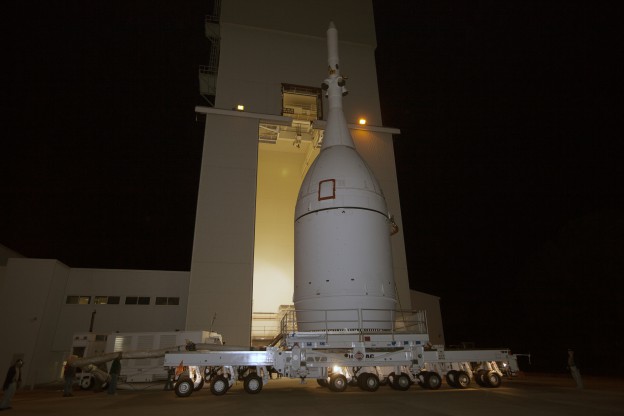 The space shuttle was an amazing technical creation, a structure of metal and composites and tile and glass and thermal protection blankets that could rise majestically through the atmosphere in defiance of gravity and could cradle humans safely through the inhospitable void of space and could glide back home in a way far too graceful for her stocky form. Amazing.

But the magic? Walk up to an orbiter today, and it’s amazing, but inert. Metal and composites and glass and tile and thermal protection blankets. A machine. The magic came when she was on the pad, fueled for launch and ready to leap upwards. A living thing. Astronauts who knew the machine intimately were surprised at the shuttle they boarded on launch day – hissing and venting and groaning. Breathing. Coiled with purpose. Visceral. Alive. No longer creation but creature.

Last week, the Space Launch System (SLS) program completed its Critical Design Review, a first in almost 40 years for a NASA exploration class rocket. Through the CDR process, review teams go through designs and plans for the vehicle with a fine-tooth comb, and then go through the results of that with a finer-tooth comb.

On paper, in PowerPoints, in CAD designs and mission animations, SLS is amazing. In its completed configuration, there’s nothing like it. Unequaled lift capability. Unequaled launch thrust. Unequaled payload volume. Unequaled power to propel robotic vanguards into the depths of the solar system. A machine that in its very form hints at its purpose – “to strive, to seek, to find, and not to yield.”* Amazing. But magic isn’t in paper.

The thing that surprises many people when we talk to them about SLS is how much metal there already is, how much of the machine already exists. It’s not magic yet, but it’s something else amazing – it’s real.

Right now, the first rocket, the first SLS that will leap from Earth, is still only a glimpse of what she’ll become. The rocket is still in pieces, and those pieces are spread out around the country. Some pieces have yet to be built. But when you go to the places where those pieces are, you begin to understand how real this machine already is, how amazing it will be when finished, and, just maybe, a little bit of the magic this metal will eventually hold.

Work today on the core stage gives a sense of the scale of the vehicle. Michoud Assembly Facility outside of New Orleans is filled with very large pieces that will be used to build something much larger — 27.6-foot-diameter barrel sections, rings, and domes that will form the oxygen and hydrogen tanks for both structural test articles for ground testing and the first flight core stage. This fall, the structural test article tanks will be welded, and by the end of the year, all of the barrel sections for the first flight vehicle will be completed. The test article tanks will be shipped next year to Marshall Space Flight Center in Huntsville, AL, where new test stands are currently being built to subject the tanks to the stresses of launch.

Also at Marshall, testing is taking place on the avionics systems hardware and software that will control the rocket during ascent, integrating the “steering” of the core stage and the boosters.

Marshall is also the site of work on two stage adapters. The center has already produced two units of the smaller one, the Orion-Stage Adapter (OSA), which connects the Orion spacecraft to the rocket’s upper Interim Cryogenic Propulsion Stage (ICPS). The first OSA was used as a test article, the second one was the first original SLS hardware to fly into space. It was launched in December 2014 on Orion’s Exploration Flight Test-1 on a Delta IV rocket, which sent Orion 15 times higher than the International Space Station’s orbit. Materials are currently arriving for a third unit, which will fly on the first launch of SLS.

The larger adapter, the Launch Vehicle-Stage Adapter (LVSA), will connect the core stage to the ICPS; welding began this month on the adapter test article.

The ICPS upper stage is being built about 25 miles from Marshall at a United Launch Alliance facility in Decatur, AL. The test article for the stage will be completed and transported to Marshall this fall for testing; work on the first flight stage began this month. The ICPS is a modified version of the upper stage of a Delta IV Heavy rocket, like the one that launched Orion for EFT-1.

Sixteen RS-25 engines for the first four flights of SLS are already in inventory at Stennis Space Center, in Mississippi, where engine testing is currently underway. The testing subjects the RS-25 engines, which previously flew on various space shuttle missions, to the different conditions they will experience on the SLS. The engines have been successfully completing tests at the higher SLS thrust level, using a new engine controller unit, with such new conditions as higher flow pressure and lower temperature of the propellant coming into the engines.

Flight hardware for the solid rocket boosters for the first SLS flights is at the Booster Fabrication Facility. Before the segments there are cast with propellant and assembled into completed boosters, one more qualification test firing of the boosters will be performed at an Orbital ATK facility in Utah. The first of these test firings was conducted in March 2015 at the facility, qualifying changes to the boosters, including the addition of an extra propellant segment to make the boosters more powerful, as well as new insulation, processing and inspection techniques. After a second test next year, the flight boosters will be assembled, incorporating changes demonstrated in the tests.

In all of these places, you can see pieces of the machine – very real, very concrete. Things we can touch. It’s not the full machine yet. But you begin to get a picture of what the machine will be. You stand at the base of a 22-foot-tall core stage barrel, and you can imagine the immensity of a stack of them almost ten times that tall. You see one RS-25 engine firing, and mentally picture four of them roaring together. You see a barrel in one place and an engine somewhere else and a booster in another place and an adapter in another, and you begin to see a rocket taking shape.

And, sometimes, particularly in the engine and booster tests, you see a little something more – you see the machine come alive, hissing, venting, breathing fire and steam. And you see the incredible – you see engines with the power to summon rain from the sky, you see boosters that can create glass from the desert sand.

For just a moment, you get a glimpse of the magic in the metal.

Next Time: How Is A Test Stand Like A Space Ship?

* From ”Ulysses,” by Alfred Lord Tennyson, who, in full disclosure, was not actually writing about a rocket.