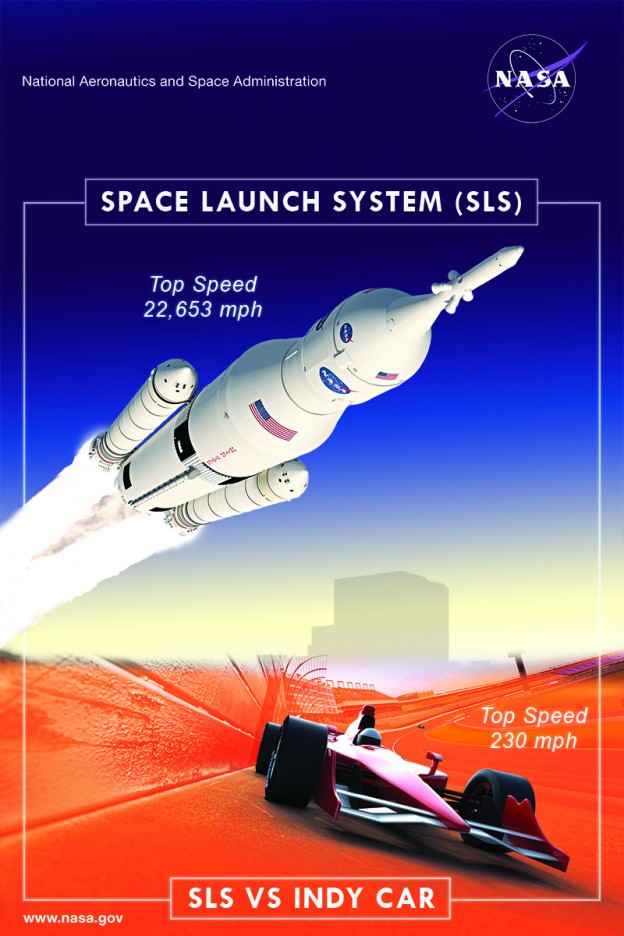 Guest blogger Martin Burkey, the SLS strategic communications team’s resident expert on all things engines, returns this week as we prepare for this afternoon’s RS-25 engine testing event at Stennis Space Center – if you’re not already, follow @NASA_SLS on Twitter and our Facebook link below for more info. — David

Rocket engines are among the most amazing machines ever invented. That’s mainly because they have to do one of the most extreme jobs ever conceived – spaceflight – starting with escaping Earth’s deep gravity well. Orbital velocity, just for starters, is over 17,000 mph, and that only gets you a couple hundred miles off the surface. Going farther requires going faster. Much faster.

The RS-25 makes a modern race car or jet engine look like a wind-up toy.

It has to move a lot of propellants to generate a lot of energy. At the rate the four SLS core stage engines consume propellants, they could drain a family swimming pool in 1 minute.

The most complex part of the engine is its four turbopumps which are responsible for accelerating fuel and oxidizer to those insanely high flow rates. The high pressure fuel turbopump main shaft rotates at 37,000 rpms compared to about 3,000 rpm for a car engine at 60 mph.

The bottom line is that the RS-25 produces 512,000 pounds of thrust. That’s more than 12 million horsepower. That’s enough to push 10 giant aircraft carriers around the ocean at nearly 25 mph.

But forget mere car engines. The RS-25 is about the same weight and size as two F-15 jet fighter engines, yet it produces 8 times more thrust. A single turbine blade the size of a quarter – and the exact number and configuration inside the pump is now considered sensitive – produces more equivalent horsepower than a Corvette ZR1 engine.

On the other hand, when you chug fluids that fast, a hiccup is a bad thing. In the case of a rocket engine, that hiccup is called cavitation. At the least, it robs the engine of power. At worst, it can cause catastrophic overheating and overspeeding. So rocket engineers spend a lot of time making sure fluids flow straight and smooth.

That’s also why they test rocket engines on the ground under highly instrumented and controlled conditions. It’s a lot less costly to fail on the ground than in flight with a full rocket carrying people on board and/or a one-of-a-kind multi-million- or multi-billion-dollar payload.

As rocket engines go, the RS-25 may be the most advanced, operating at higher temperatures, pressures, and speeds than most any other engine. The advantage comes down to being able to launch more useful payload into space with less devoted to the rocket structure and its propellants.

In addition to its power, another key consideration for SLS was the availability of 16 flight engines and two ground test engines from the shuttle program. It’s much harder and more expensive to develop a new engine from scratch. Using a high-performance engine that already existed gave NASA a considerable boost in developing its next rocket for space exploration.

The remaining shuttle engine inventory will be enough for the first four SLS flights. As for the maturity part, the RS-25 design dates to the 1970s and the start of the Space Shuttle Program. But it’s undergone five major upgrades since then to improve performance, reliability, and safety. If only we could all upgrade 5 times as we age. Further, much of the knowledge and infrastructure needed to use the available engines and restart production already existed. Another hidden savings in time and money.

In its next evolution, the RS-25 design will be changed to make it a more affordable engine designed for just one flight and certify it to even higher thrust – which it is very capable of – to make SLS an even more impressive launch vehicle.

Next Time: The Engine Experience