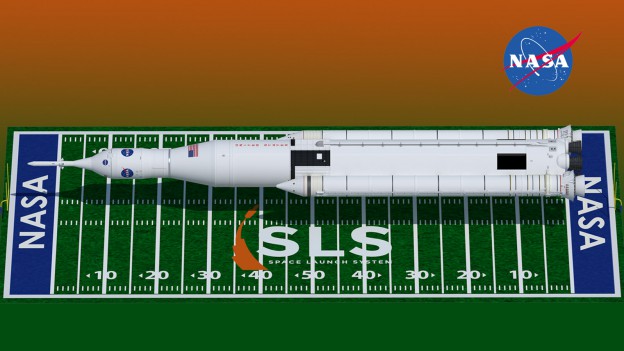 Ah, September. That wonderful time of year when the air becomes cooler, leaves begin to turn color, and every discussion is required by law to include football metaphors. You certainly won’t see me intentionally grounding such a great opportunity, so let’s talk about what it means to “go long” in human spaceflight.

The first launch of SLS will send the Orion spacecraft into a large lunar orbit beyond the moon. But, really, how does that compare to previous human spaceflight missions? Let’s use a comparison to a football field to find out.

In real life, a football field, from the back end of one end zone to the other, is just slightly longer than the 322-feet-tall SLS. But for the sake of this metaphor, we’re going to scale the distance Orion will reach at its farthest point on Exploration Mission-1 to the length of that field. Imagine you’re standing at the very end of the end zone of an American football field. In the distance, at the far end of the other end zone, 120 yards away, is the farthest point Orion will reach on EM-1. Are you imagining it? Good.

First play, we’re tossing from the back edge of our end zone to the International Space Station. Complete! We’re well on our way! Well, sort of. This doesn’t quite get you out of your own end zone. In fact, at about 230 miles — roughly the driving distance between New York and Washington, DC — you’ve only gained about three and a half inches on our field.

For second down, we’re going to be a bit more aggressive. Back in 1966, almost 50 years ago, two astronauts, Pete Conrad and Dick Gordon, set an Earth orbit altitude record of 854 miles on the Gemini 11 mission – the farthest humans have been without heading to the moon. But even when Gordon takes the ball, you’ve only covered a total of one foot.

Third down, aiming farther still. The altitude record reached on Gemini 11 is less than a third of the altitude Orion reached on its first spaceflight, Exploration Flight Test-1, in December 2014. Using that altitude, 3,600 miles, for our next play, we’ll be just over one percent of the way to our goal, at a total of four feet and eight inches from where we started.

It’s now fourth down, and we’re still at the back of our own end zone. For an even longer distance, we’ll use the distance the International Space Station travels during one orbit of the Earth – 26,250 miles. This play gives us our first down, and also put us out of the end zone by almost four feet.

Sticking with Earth orbit distances is getting us nowhere. We’ve got to be even more aggressive. A long Hail Mary throw sends the ball to the far end of the field, where it’s caught … by Neil Armstrong on the moon! The crowd goes wild! TOUCHD… Wait… What? That’s still only at the other eight-yard line? Oh, well. Let’s keep going.

You look toward the end zone, and there’s astronaut Jim Lovell of Apollo 13! He’s open, and you make the pass. On their emergency free-return trajectory around the moon on Apollo 13, Lovell, Fred Haise and Jack Swigert traveled farther from Earth than anyone has ever been, almost 249,000 miles out. But although Lovell went around the moon on two different Apollo missions, he was never able to touch down, and, unfortunately, he doesn’t now, either. Even the human distance record from Earth is short of the end zone, by three and a half yards.

Back in formation, the quarterback steps back, fires to Orion, caught in the very back of the end zone for a 23 and a half yard gain from where Lovell had it! TOUCHDOWN! On EM-1, Orion will travel about 10 percent farther into space than Apollo ever did. Not bad for a first test flight.

And, from there it gets interesting. Since this was just the first possession, you’d better not let that arm get tired – on our field, the trip to Mars will be about a 77,000 yard pass. Now, THAT is going long.

Next Time: The Journey to Mars