Back in November, we debuted the first in a set of new videos, “No Small Steps.” Now, the next “Steps” is here!

The first video in the series explained why going to Mars is a very big challenge, and why meeting that challenge requires a very big rocket. (Hint: You need a whole lot of fuel.)

The second installment goes a step further, by discussing how NASA’s Space Launch System (SLS) builds on the foundation of the Saturn V and the Space Shuttle, but then uses that foundation to create a rocket that will accomplish something neither of them could – sending humans to the Red Planet. 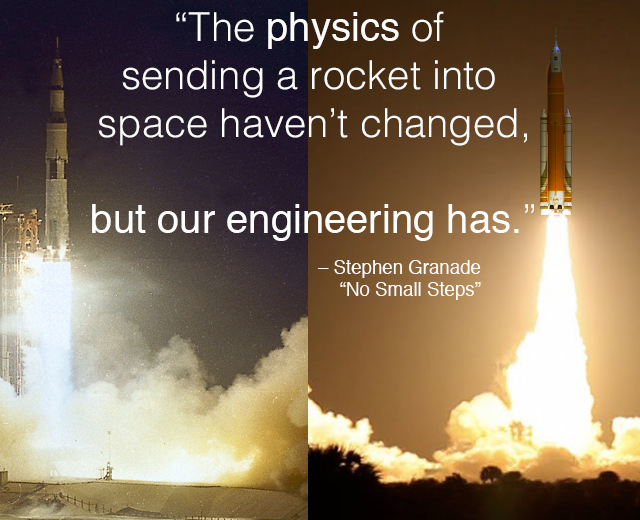 SLS takes advantage of some of the best concepts and systems from its predecessors. Like the Saturn V, SLS is a massive, staged rocket. Like the space shuttle, it uses solid rocket boosters and RS-25 engines. But unlike either of those vehicles, SLS will be able to support human missions to Mars. How do you combine elements of two different vehicles and produce a new one with a capability neither of the others had? You take the best of yesterday and INNOVATE.

Today’s teams have the added advantage of a few decades of technology development. The teams that built the Saturn and Shuttle were pioneers of rocket science, but today we’ve not only built on their foundation but also improved on things like welding science.

And while they may not be as glamorous as making smoke and fire, advances in things like modeling and analysis, welding techniques and software development add up to be a very big deal.

Why? Because on the journey to Mars, there are No Small Steps.

Next Time: Visiting the Rocket Factory