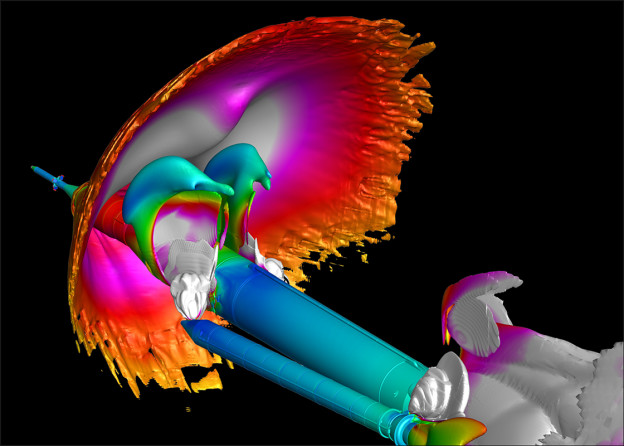 You know how big the SLS vehicle will be. We described the tremendous power and thrust of just one of the RS-25 engines after last year’s test firings. You may have witnessed live as we fired one of the massive five-segment solid rocket boosters last March. Through all that, perhaps you can imagine how incredible it will be at launch when all four engines and both boosters ignite together to lift this 322 feet tall, 5.75 million pound rocket up through the atmosphere and toward deep space. Imagine the thunderous vibration in your chest even as you stand several miles away.

Envision the power generated at launch as the engines and boosters throttle up to 8.8 million pounds of thrust. The heat is incredible! The vehicle starts to shake. The engine nozzles, as big and solid as they seem, will warp under the pressure of heat when the engines ignite seconds ahead of the boosters. While still on the pad, the boosters are bearing the weight of the entire vehicle even as they fire up for launch – the weight of almost 13 Statues of Liberty resting on an area smaller than an average living room.

And now things are heating up on the front end of the rocket as well. Approaching Mach 1, shock waves move over the entire vehicle. Friction from just moving through the air causes the nose of the vehicle to heat. The shock waves coming off the booster nose cones strike the core stage intertank and can raise the temperature to 700 degrees. The foam insulation not only keeps the cryogenic tanks cold, it keeps the heat of ascent from getting into the intertank structure between the hydrogen and oxygen tanks.

Are you feeling it yet? That’s a lot to handle. These impacts from weight (mass), pressure, temperature and vibration are called “loads.” It’s a key part of the “rocket science” involved in the development of the SLS vehicle.

A load is a pressure acting on an area. Sounds simple, right? There are all kinds of loads acting on SLS, some even before it leaves the launch pad. Tension and compression (pulling and pushing), torque (twisting), thermal (hot and cold), acoustic (vibration), to name a few. There are static (stationary) loads acting on the big pieces of the rocket due to gravity and their own weight. There are loads that have to be considered when hardware is tipped, tilted, rolled, and lifted at the factory. There are “sea loads” that act on the hardware when they ride on the barge up and down the rivers to various test sites and eventually across the Gulf of Mexico and up the Florida coast to Kennedy Space Center for launch. Engineers have to consider every single load, understanding how they will affect the structural integrity of the rocket and how they will couple and act together.

How do engineers know the rocket’s ready to handle the loads it has to face to send astronauts into deep space? Step One is good design – developing a rocket robust enough to withstand the strains of launch. However this is difficult as the vehicle needs to be as lightweight as possible. Step Two is digital modeling – before you start building, you run many, many simulations in the computer to a level of detail that would make any Kerbal Space Program fan jealous. Step Three is to do the real thing, but smaller – wind-tunnel models and even scale-model rockets with working propulsion systems provide real-life data. And then comes Step Four – build real hardware, and stress it out. Test articles for the core stage and upper stage elements of the vehicle will be placed in test stands beginning this year and subjected to loads that will mimic the launch experience. Engines and boosters are test-fired to make sure they’re ready to go.

Still want to be the rocket? Stay tuned for more on loads as we do everything possible to shake, rattle, and yes, even roll, the pieces of the rocket, ensuring it’s ready to launch in 2018.

Next Time: No Small Steps Episode 3