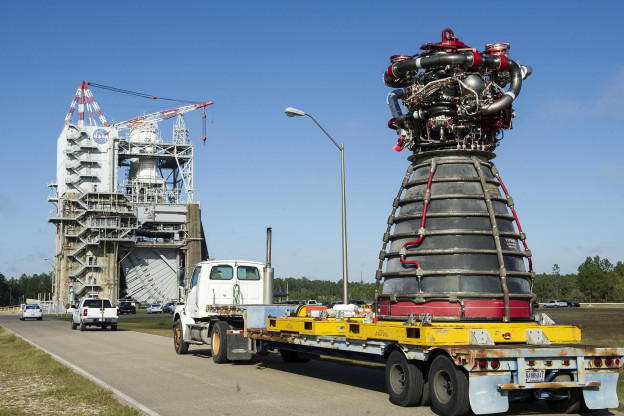 NASA is preparing for the first of many flights of the agency’s Space Launch System rocket and Orion spacecraft. Every day we’re making progress toward their first integrated test flight. Today, that work is taking place at numerous sites around the country, but the work of that nationwide team is firmly focused on one place – the launch pad.

Hundreds of companies across every state have been a part of SLS and the Orion crew spacecraft, many of them small businesses providing specialized components or services. That work comes together at NASA and prime contractor facilities where the “big pieces” are assembled before it all comes together on the launch pad at NASA’s Kennedy Space Center in Florida.

1) Second Stage, From Alabama to Florida by Barge

Some of the pieces have a relatively direct route to the launch pad. At Marshall Space Flight Center in Huntsville, Alabama, where the SLS program is managed, for example, the flight unit for the Orion Stage Adapter (OSA) that will connect the SLS second stage to the crew spacecraft is being welded, and welding will begin next month on the Launch Vehicle Stage Adapter (LVSA) that will connect the core and second stages. When completed, the LVSA will travel by barge to the gigantic Vehicle Assembly Building (VAB) at Kennedy Space Center (KSC) in Florida, where final stacking of SLS and Orion will take place. The smaller OSA has the option of barge or truck, and after arriving in Florida, will make a stop at a facility where 13 CubeSats will be installed before continuing on to the VAB.

Half an hour away, the second stage of the rocket, the Interim Cryogenic Propulsion Stage (ICPS), is being completed at the United Launch Alliance facility in Decatur, Alabama. The process for the ICPS will be one step longer – after being barged from Decatur to Florida, the stage will be prepared for flight at a payload processing facility before being moved to the VAB for stacking.

2) Boosters, From Utah to Florida by Train

This one’s a little more complicated. RS-25 core stage engines are currently in inventory at Stennis Space Center in Mississippi, where engine testing is taking place. The core stage hardware for the first launch of SLS is currently being welded at Michoud Assembly Facility in New Orleans. The engines for the first flight will be transported from Stennis to Michoud, and integrated into the first core stage when it’s completed. The core stage with engines will then be transported back to Stennis, where the 212-foot-tall stage-and-engine assembly will be placed into a test stand and all four engines will be fired together in the largest liquid-engine ground test since Apollo. After the test, plans call for the stage to be shipped to Kennedy by barge, where it will be brought to the VAB for assembly with the rest of the rocket.

4) Rocket, From VAB to Launch Pad via Crawler

Once all of the elements have arrived at the VAB, they’ll be stacked vertically and prepared for launch. The large crawler transporter will bring the mobile launcher with tower to the rocket, and will then carry rocket and launcher together to the launch pad. Which leaves only one last step:

5) Orion, From Launch Pad to Deep Space, via Rocket

NASA is on track for the first mission to launch no later than November 2018 from Florida. The first test flight of SLS and Orion will be incredible, and it will pave the way for our second exploration mission – our first with crew aboard the spacecraft. As these missions continue to come together, we’re closer to sending astronauts to Red Planet than at other point in our history. All the work we’re doing together today will continue to enable that journey in the future.