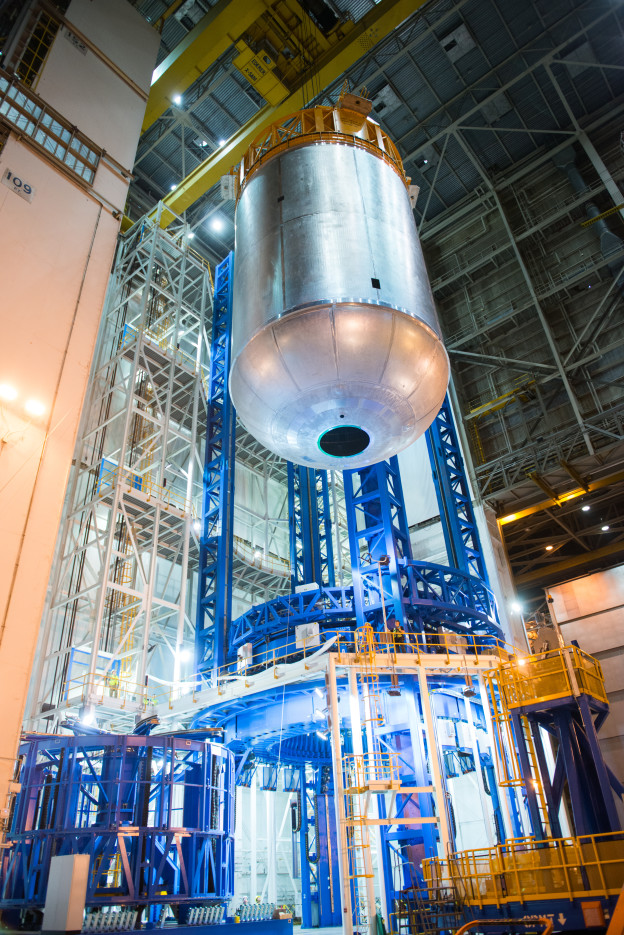 How do you put the world’s largest rocket under a microscope?

One piece at a time, of course.

NASA’s Space Launch System – SLS – will be the world’s most powerful, capable rocket. It will send intrepid explorers, their spacecraft, their landers, their habitats, and all their other equipment to survive and thrive in deep space.

But, first, it has to survive launch. SLS is an extreme machine for operating in extreme environments – 6 million pounds going from zero to around 17,500 miles per hour in just 8 minutes or so after liftoff. Some parts are minus 400 degrees F. Some parts are 5,000 degrees. Extreme.

So NASA works hard to make sure everything works as planned, including the largest part, the core stage – 212 feet long, 27 feet in diameter, and weighing more than 2 million pounds all gassed up and ready to go.

NASA and core stage prime contractor Boeing are building hardware at Michoud Assembly Facility in New Orleans, Louisiana for the first flight in 2018. Engineers have put the design through numerous computerized structural analyses and simulations, but that’s not the same as actually cutting, welding, and assembling giant metal panels, domes, rings, etc. on new manufacturing tools with new processes for the first time. Each time, the team starts to weld new flight hardware, they methodically go through a series of steps to make sure that first flight hardware is perfect.

“Perfect” is a relative term. Some technically-minded people consider welding itself as a defect in a metal structure because the weld is never as strong as the rest of the metal, according to Carolyn Russell, chief of the metal joining and processes branch at Marshall Space Flight Center in Huntsville, Alabama, with 32 years of experience in the field. Given the advanced state of welding technology, other people might consider the term “defect” as a bit extreme.

None other than legendary rocket scientist Wernher von Braun declared in the midst of Saturn V moon rocket development in 1966: “A lifetime of rocketry has convinced me that welding is one of the most critical aspects of this whole job.”

The first step to SLS flight hardware was establishing the “weld schedule,” – how the welding will be done. SLS uses “friction stir welding” – a super fast rotating pin whipping solid metal pieces until they are the consistency of butter and meld together to bond the core stage’s rings, domes, and barrel segments. The result is a stronger and more defect-free weld, than traditional methods of joining materials with welding torches.

Based on the particular aluminum alloy and thickness, engineers establish the required pin rotational speed, travel speed, how hard it pushes on the metal Before committing the welding schedule to full size or flight hardware, the core stage team checks the process on test panels about 2 feet long. Test panels are made at Michoud and sent to Marshall, where they are nondestructively inspected, sectioned and then analyzed microscopically for minute defects.

Marshall materials scientists study the samples under magnification in the search for cracks and voids, and to understand how deeply the weld penetrated the parts. They also undergo non-destructive evaluation, including x-ray, ultrasonic, and dye penetrant testing.

With weld processes tested for every part of the core stage, the manufacturing team can begin building weld confidence articles, or “WCAs.” There are WCAs for the engine section, the liquid oxygen tank, and the liquid hydrogen tank. Likewise, the WCAs are cut into samples that are again put under the microscope at Marshall. In theory, the WCAs should be perfect if the weld schedule was followed. In reality, it doesn’t quite work out.

WCA welding consists of lots of “firsts,” Russell explained. It’s a test of the tooling and factors like parts alignment and tolerances. Heat transfer from the welds to the surrounding metal is different once large parts are clamped together. It short, stuff happens. Adjustments are made. Weld samples are cut and again put under the microscope until the weld schedule is perfected.

All this testing and microscope-gazing has led to a major SLS milestone: the welding of structural test articles – STAs – and flight articles for the hydrogen and oxygen tanks, engine section, and forward skirt, which is underway now. The STAs will be shipped to Marshall next year. Secured into test stands – that are secured firmly to the ground – these test articles will be rigged with hundreds of sensors and then pushed and prodded to see if they can survive the stresses the flight hardware will experience – accelerating bending, twisting, etc.

Then, and only then, can engineers say that the giant core stage is ready for its launch debut. But that’s a story for another day.