On Tuesday, the Air and Ocean groups flew onboard the DC-8 for the first two SARP science flights.  The Land group was on the ground in an orchard in the Central Valley as the DC-8 flew overhead collecting MASTER data to measure crop evapotranspiration.  The flyover was at 13,000 ft — so those on the DC-8 couldn’t make out anyone on the ground, but those on the ground definitely saw the DC-8!  After the MASTER data was collected, the DC-8 descended to only ~1500 ft altitude and collected air samples over a number of dairies, feet lots, and ponds in the Central Valley.  Flying so low made it extremely bumpy and a few people felt sick. 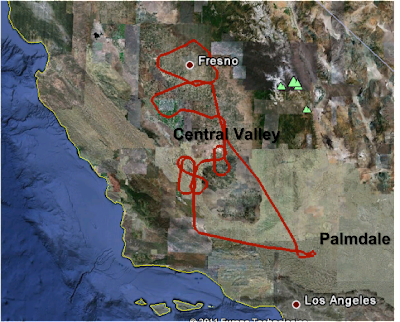 During the afternoon flight, we flew a planned missed approach over LAX to collect air samples from water treatment plants near the airport.  We then flew to the Santa Barbara Channel to collect MASTER data over kelp beds.  It was a bit cloudy but we managed to get in some lines near the coast. 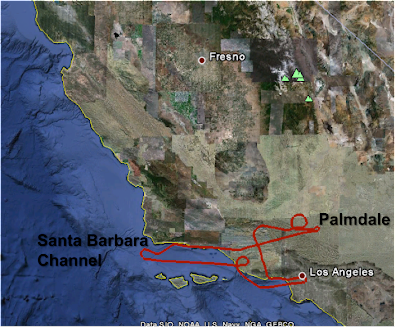 Wednesday started bright and early (4:30AM) for the Land group who had to drive back from Lost Hills to meet the rest of the group at Edwards Air Force Base. 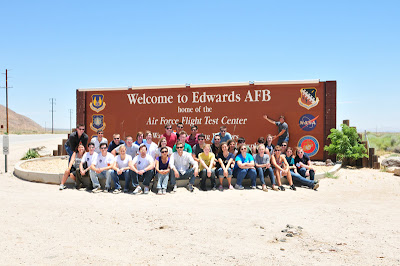 SARP outside of Edwards Air Force Base

We all drove to the NASA Dryden Flight Research Center (DFRC) inside Edwards AFB where we were treated to an incredible tour.   We were able to go inside the Shuttle Carrier Aircraft (a 747 that carries the Space Shuttle back to Florida when it lands at Edwards).  The inside of the 747 is almost completely empty to cut down on its weight so it can carry the Space Shuttle on its back. 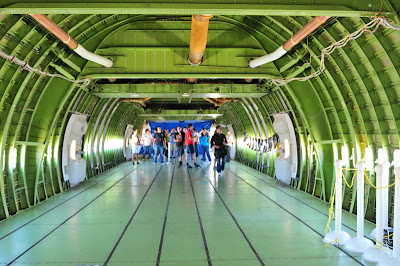 SARP inside the Shuttle Carrier Aircraft 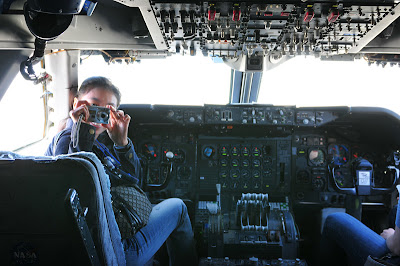 Julie inside the cockpit of the 747 Shuttle Carrier 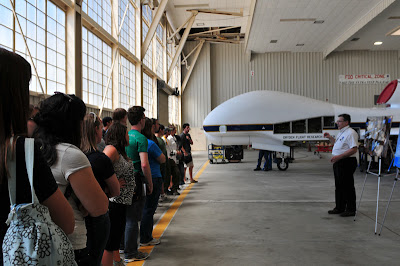 After the tour, many SARPians visited the Dryden gift shop and purchased NASA apparel for themselves and their friends and families.

In the afternoon, we all headed back to Palmdale for a flight and weather brief for tomorrow’s flights and a tour of SOFIA (the Stratospheric Observatory for Infrared Astronomy).  SOFIA is a telescope inside a 747 that shares its hangar with the DC-8.  Dr. Eric Becklin, SOFIA chief science advisor, gave a talk about SOFIA’s capabilities.   We all got to go inside the passenger cabin of SOFIA where the astronomers sit during flights.  A few SARPians were also treated to a special peek inside the cavity that houses the actual telescope.  In order to go inside, they had to put on masks, hairnets, lab coats, and booties.   We are so grateful to Stefan Teufel for allowing us to have this rare opportunity! 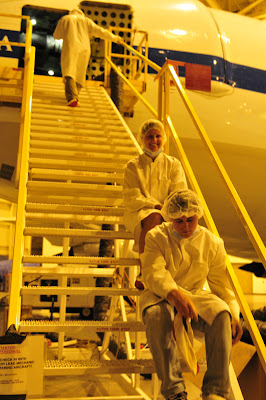 Getting ready to go inside the SOFIA telescope cavity

After a long day, tired SARPians returned to the hotel to rest before the final two flights on Thursday.