Mike Wargo, the chief lunar scientist for the Exploration Systems Mission Directorate, gives some insight on the history of LRO/LCROSS. You can listen here (2 MB).

How did NASA’s LRO/LCROSS missions become the “first step” back to the moon?

Before the LRO or LCROSS missions were even thought of, NASA already was busy thinking about the things we didn’t know about the moon — what data we’d need to have in hand to be able to go back and perform longer-term exploration and science missions. It’s kind of the same kind of planning involved in getting ready for a vacation. If you were driving, what’s one of the first things you’d want to bring with you?  I know I’d go out and get a really good atlas, the best maps of all different types. You’d want to know where you were going and what’s there and you’d want to be prepared for the unexpected, or you might not ever want to repeat the trip. The moon is the just like that. 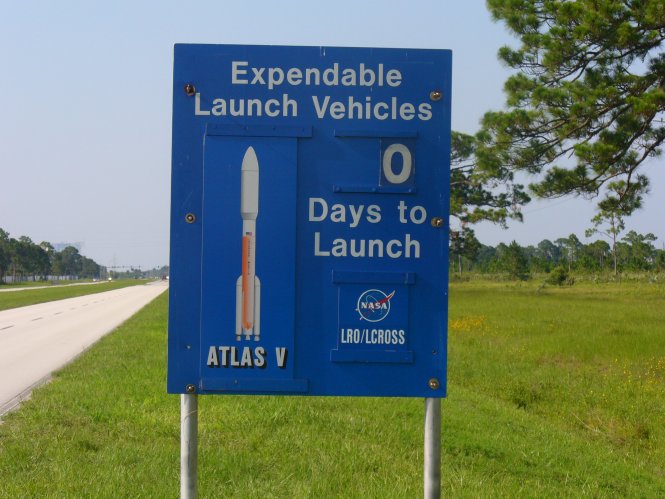 Excitement is building at Cape Canaveral as visitors arrive for the launch of NASA’s Lunar
Reconnaissance Orbiter and Lunar Crater Observation and Sensing Satellite missions
to the moon. Launch is set for 5:12 p.m. EDT.

We don’t have a good set of maps of the lunar terrain. Think of some of the questions you might ask along the way.  How steep is that ridge we see over that hill?  How hot will it be when we get there? How cold will it get at night? Are there going to be any big rocks in our way when we’re landing?  Now, we only know about certain safe landing areas pretty close to the equator. We don’t know how to get to various sites on the moon, since some types of our lunar maps have places where it’s fuzzy or even have gaping holes in them in some places. Our earlier Apollo explorers brought back good data, but we need to know a lot more before we go there to stay.

NASA wants returning crews to be safe, healthy and productive, so they gathered some of the best lunar scientist to help figure out what we already knew and what we still need to know.

Keeping in mind the idea that science enables exploration and exploration enables science, some of the brightest minds at NASA got together to answer questions like: What would a mission look like that would gather the kind of data that would be needed to map the lunar surface for future exploration?  What kind of measurements would it need to make?  What would be the best way to fly around the moon to make those measurements? The result was the Lunar Reconnaissance Orbiter or LRO mission that will get close to the moon to take the measurements needed to produce a variety of maps of the surface, maps that would make up an altlas of the most important information we will need to explore. The LRO will orbit the moon at an altitude of a mere 50 kilometers (30 miles). At that low altitude, LRO will encounter what some scientists call “lumpy gravity,” that can affect how a spacecraft moves around the moon comparable to the way turbulence affects how airplanes move through rough air, but where the unexpected motions of the spacecraft are caused by small changes in the local gravity rather than by unexpected air motion. Just like airplane passengers feel, this can jostle the spacecraft and cause it to depart its intended orbit. It also increases the amount of fuel consumed by the spacecraft to keep it headed in the right direction. That’s why LRO has a big fuel tank.

The Atlas V was selected for the LRO mission and because it is a big rocket, there was ample room for another spacecraft to go along with it. NASA asked if you had this much mass, only this amount of money, the best partners and minds in academia and industry, what could you do? They got a bunch of responses and decided to choose the proposal that answered one of the oldest questions they wanted to know: Water, does it exist in the shadowed craters of the moon? That’s why LCROSS was chosen, it was a low-cost, innovative mission.

7 thoughts on “How Did LRO and LCROSS Become the First Step Back to the Moon?”