Watching the skies is much more than a hobby with the Marshall Center’s Bill Cooke, lead of the Meteoroid Environment office — it’s an obsession. 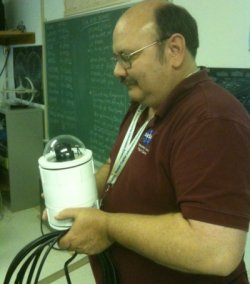 Each morning when Cooke logs on to his computer, he quickly checks email for the daily update from the fireball camera network. Groups of smart cameras in Cooke’s new Fireball network triangulate the fireballs’ paths, and generate the report that appears in his email each morning.

Cooke’s network of cameras is currently made up of three cameras; however he is looking to add 12 additional cameras, and he’s actively seeking schools, science centers and planetariums to host his cameras. The cameras will need to be deployed in clusters of five. One group will be spread over the southeast United States; another in the Ohio and Kentucky area; and another along the Atlantic coast in the northeast. The hope is that at least one of the three regions will have clear skies at any given time.

The following criteria must be met for a location to be considered as a camera site:

Stay tuned for details on what the fireball network reports!

4 thoughts on “The Great Fireball Network”