The colors of emitted light within an aurora depend on the initial energy of the charged particles (mostly electrons) cascading into Earth’s atmosphere.  Electrons with higher initial energies are able to penetrate deeper into the atmosphere, whereas those with lower initial energies lose all their energy at higher altitudes. The blue aurora emitted from low-altitude molecular nitrogen is most commonly seen at higher latitudes, such as in Canada and Alaska, where high-energy electrons are more common. Red aurorae mostly result from lower-energy electrons reacting with atomic oxygen at high altitudes, which can occur at lower latitudes (<50 degrees) during extremely strong geomagnetic storms — such as is seen in images here.  The auroral electrons that make it into the low-latitude atmosphere usually do not have enough energy to reach molecular nitrogen.  This is why low-latitude aurorae are almost always red. 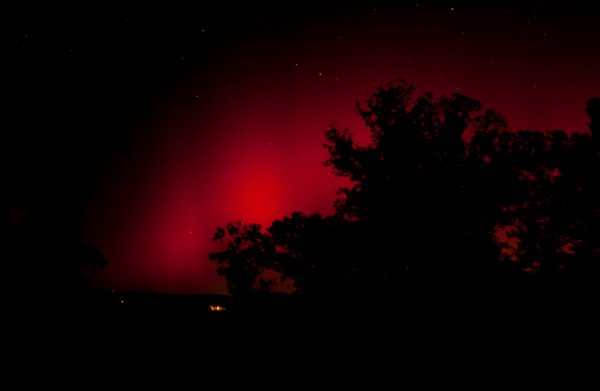 5 thoughts on “Images of Rare Aurora in Southern Tennessee”