The NASA Meteoroid Environment Office can confirm a bright fireball observed by several eyewitnesses in Alabama, Georgia and Tennessee on Mar. 7, 2012 at 10:19:11 p.m. EST. The fireball was observed by three NASA cameras located at Marshall Space Flight Center in Huntsville, Ala., Tullahoma Tenn., and Cartersville, Ga. The meteor was first recorded at an altitude of 52.7 miles (84.8 km) southeast of Tunnel Hill, Ga., moving slightly south of west at approximately 15 km/s (33,500 mph). It was last seen 14.4 miles (23.2 km) above State Road 95 south east of Rock Springs, Ga. A map of the trajectory is available here: http://www.billcooke.org/events/NGA_2012Mar08/GeorgiaTracks.jpg. The yellow line is the initial automatic meteor trajectory solution. The orange line is the manual (refined) meteor trajectory.

Below are video still images and a short video captured from the cameras at the Marshall Center in Huntsville, Ala. and Cartersville, Ga. 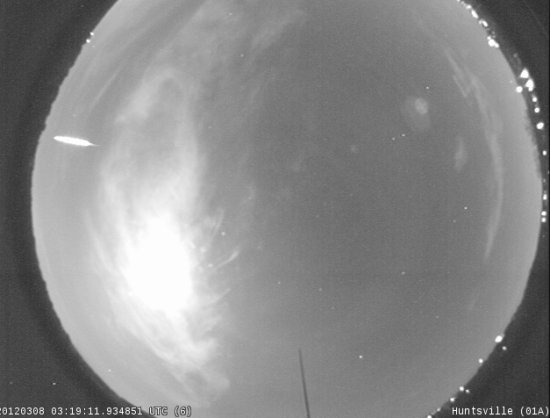 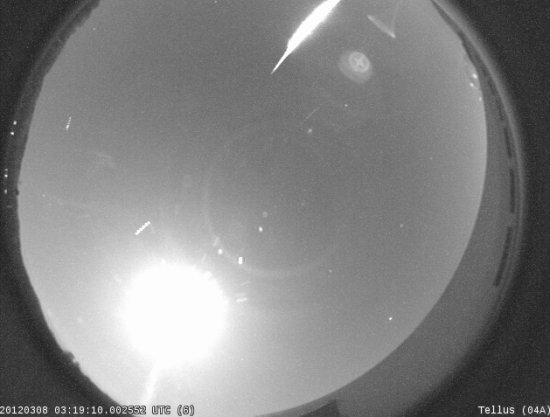 The next full Moon is on Thursday, March 8, 2012.  The Moon will be 180 degrees away from the Sun in Earth-based longitude at 4:40 am EST, and will appear full for about three days around this time, from Tuesday evening through Friday morning.

The full Moon in March is known by many names: the Worm Moon, Sap Moon, Crow Moon, Crust Moon, Sugar Moon, and Lenten Moon.  According to the Farmer’s Almanac, the native tribes of what is now the northern and eastern U.S. named this the Worm Moon after the earthworm casts that appear as the ground thaws.  The more northern tribes knew this as the Crow Moon, when the cawing of crows signaled the end of winter.  Other northern names are the Crust Moon, because the snow cover becomes crusted from thawing by day and freezing at night, or the Sap Moon as this is the time for tapping maple trees.  Europeans called this the Lenten Moon.

As to other celestial events between now and the full Moon after next:

In early March, Mercury is visible in the evening sky, reaching its greatest elongation on Monday, March 5, 2012.  In early March, Jupiter and Venus appear to move closer together, reaching their closest (called conjunction) on Tuesday, March 13, 2012, after which they will appear to move apart again.  Mars continues to ride high in the sky, rising around sunset and setting around sunrise, having been opposite the Sun (as seen from the Earth, called “opposition”) on Saturday, March 3, 2012.  Saturn rises later in the evening (around the time Venus and Jupiter set) and rides high in the early morning sky.  Saturn will be at opposition on Sunday, April 15, 2012.

On Monday, March 5, 2012, Mercury will be at its greatest elongation, and this will be the most favorable opportunity to look for Mercury in 2012 (for the northern hemisphere, at least).  Look for it about 45 minutes to an hour after sunset (around 6:45 to 7 pm in the Washington, DC area) very low on the western horizon.  Venus and Jupiter will appear close together higher in the sky.

On Saturday night/Sunday morning, March 10 to 11, 2012, the waning (i.e.,past full) gibbous (i.e., but still more than half full) Moon will form a triangle with the planet Saturn and the bright star Spica.  For the Washington, DC area, the Moon will rise at about 9:23 pm EST on Saturday and reach its highest point in the sky at 3:40 am EDT on Sunday (note the one hour shift to Daylight Savings Time).

We “spring forward” into daylight savings time on Sunday, March 11, 2012, giving us an “extra” hour of sunlight in the evening but shifting the time of sunrise back to within a few minutes of when sunrise was in late Decemberand early January.  These are not the latest sunrises of the year.  The latest sunrises will come in late October and early November, just before we “fall back” to standard time.

On Tuesday, March 13, 2012, Venus and Jupiter appear closest to each other in the evening sky (called conjunction), about 3 degrees apart.

On Sunday evening, March 25, 2012, look for the crescent Moon in the western sky after sunset.  Jupiter will be about 3 degrees below the Moon and Venus will appear about 8 degrees to the upper left.  For the Washington, DC area,sunset is at 7:25 pm EDT and moonset is at 10:32 pm EDT.

On Monday, Mar 26, 2012, the Moon will have shifted to about 4 degrees left of Venus, with Jupiter about 11 degrees to the lower right from Venus. Venus is bright enough to be seen in broad daylight if you can find it.  Using the Moon as a guide, you should be able to find Venus before sunset. For the Washington, DC area, sunset is at 7:26 pm EDT and moonset is at 11:27 pm EDT.

On Tuesday, March 27, 2012, Venus reaches its greatest elongation, setting as long after sunset as it will for this appearance.  Since Venus orbits closer to the Sun than the Earth does, we always see it either as the Evening Star or as the Morning Star.

On Tuesday evening, April 3, 2012, Venus will appear to the left of the Pleiades star cluster.  Especially with binoculars or a small telescope, this bright plant should appear swimming in a sea of stars.