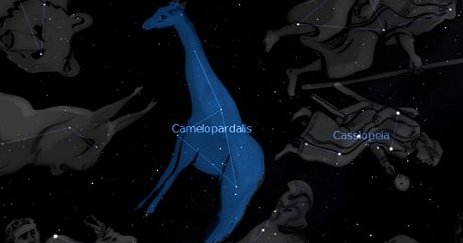 Step outside and take a look at the skies on the evening of May 23 into the early morning of May 24. Scientists are anticipating a new meteor shower, the May Camelopardalids. No one has seen it before, but the shower could put on a show that would rival the prolific Perseid meteor shower in August. The Camelopardalids shower would be dust resulting from a periodic comet, 209P/LINEAR.

“Some forecasters have predicted a meteor storm of more than 200 meteors per hour,” said Bill Cooke, lead for NASA’s Meteoroid Environment Office. “We have no idea what the comet was doing in the 1800s. The parent comet doesn’t appear to be very active now, so there could be a great show, or there could be little activity.”

The best time to look is during the hours between 06:00 and 08:00 Universal Time on May 24, or between 2-4 a.m. EDT. That’s when forecast models say Earth is most likely to encounter the comet’s debris. North Americans are favored because their peak occurs during nighttime hours while the radiant is high in the sky.

On the night of May 23-24, NASA meteor expert Bill Cooke will host a live web chat from 11 p.m. to 3 a.m. EDT. Go to this page to learn more about the May Camelopardalids, to get information about the live chat and to view the live Ustream view that will be available during the chat.

5 thoughts on “Join Us For the May Camelopardalids!”