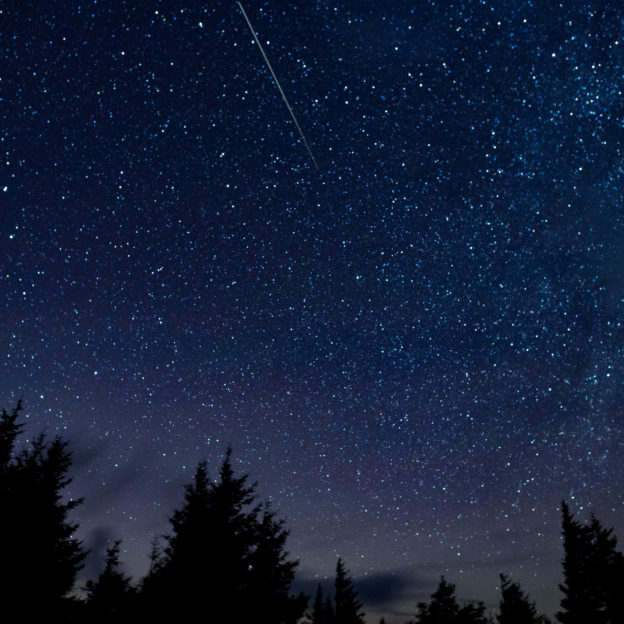 Some of these events get blown a bit out of proportion. A classic example is that every time Mars comes to opposition (closest approach to Earth), the internet reverberates with the very false statement that Mars will appear as large as the Moon at that time. Nothing could be farther from the truth, as Mars, at its very closest to Earth, appears only 1/70th the apparent diameter of the Moon.

This year we have a new one — reports are circulating that this year’s Perseids will be the “brightest shower in recorded human history,” lighting up the night sky and even having some meteors visible during the day. We wish this were true… but no such thing is going to happen.

This year, we are expecting enhanced rates of about 150 per hour or so, but the increased number will be cancelled out by the bright Moon, the light of which will wash out the fainter Perseids. A meteor every couple of minutes is good, and certainly worth going outside to look, but it is hardly the “brightest shower in human history.” The Leonid meteor storms of the late 1990’s and early 2000’s were much more spectacular, and had rates 10 times greater than the best Perseid display.

So, if not this year’s Perseid shower, what was the greatest meteor show of all time? I think many meteor researchers would give that award to the 1833 Leonids, which had rates of tens of thousands, perhaps even 100,000, meteors per hour. During a good Perseid shower under ideal conditions, you can see about one meteor per minute. Now imagine yourself being back in 1833, on the night of Nov. 12. Looking outside, you would see something like 20 to 30 meteors PER SECOND. No wonder we read accounts like this one from South Carolina (Chambers, A Handbook of Descriptive and Practical Astronomy, Volume 1, 1889):

“Upwards of 100 lay prostrate on the ground…with their hands raised, imploring God to save the world and them. The scene was truly awful; for never did rain fall much thicker than the meteors fell towards the Earth; east, west, north and south, it was the same.”

Now, THAT’s a meteor shower. The 1833 storm had a profound effect on those that witnessed it; it also gave birth to modern meteor science. Those of us who study meteors dream of such a display happening sometime within our lifetimes.

But it won’t be caused by this year’s Perseids.

20 thoughts on “The Greatest Meteor Show of All Time”