For Comet Vocabulary, please read to the end of the post.

For most, early July is when most people living in the United States look to the skies to watch dazzling firework shows. However, this month there is a different kind of show happening in the sky.

Comet Near-Earth Object Wide-field Infrared Survey Explorer (NEOWISE) was only discovered a few months ago on March 27 by NASA’s NEOWISE telescope and has quickly become a popular solar system visitor. Its popularity is warranted, however, as it is the brightest comet since Comet Hale-Bopp that passed by Earth 23 years ago in 1997.

Comet nuclei are cosmic snowballs of frozen gases, rock and dust that orbit the sun. They can range in size from a few miles to tens of miles wide, and the nucleus of NEOWISE measures about 3 miles across. When these comets approach the sun, their frozen bodies start to sublimate, and they spew dust and gasses in a tail that can span millions of miles.

Comet NEOWISE made its harrowing close approach to the sun, known as its perihelion, on July 3, and it is now zooming past the Earth on its way back out of the solar system. NEOWISE will make its closest approach (64 million miles) to Earth on July 22, but the best viewing window is happening right now until July 19.

NEOWISE can be seen with the naked eye, but for an even better viewing experience, binoculars or even a telescope is recommended. As for which to choose, binoculars are your current best option. “Definitely use binoculars for now – the tail of NEOWISE is at least 7 degrees long, which is much bigger than the field of view of most telescopes,” said Bill Cooke, lead of NASA’s Meteoroid Environment Office at Marshall Space Flight Center. “Binoculars will allow you to see the whole thing, whereas a telescope only shows a tiny part.”

To see NEOWISE, start looking in the northwestern sky about an hour after sunset. The comet will be below the stars that make up the bowl of the Big Dipper and shining nearly as brightly at a magnitude 3. If you are an early riser, you can still see NEOWISE about an hour before sunrise in the northeastern horizon until the end of the week.

You need a clear view of the horizon to see this comet. Beaches, fields, and areas with higher elevations are all great observation spots. In areas with more light pollution, binoculars may be necessary for viewing. This is definitely a once-in-a-lifetime event, as NEOWISE won’t be visiting again for 6,800 years! 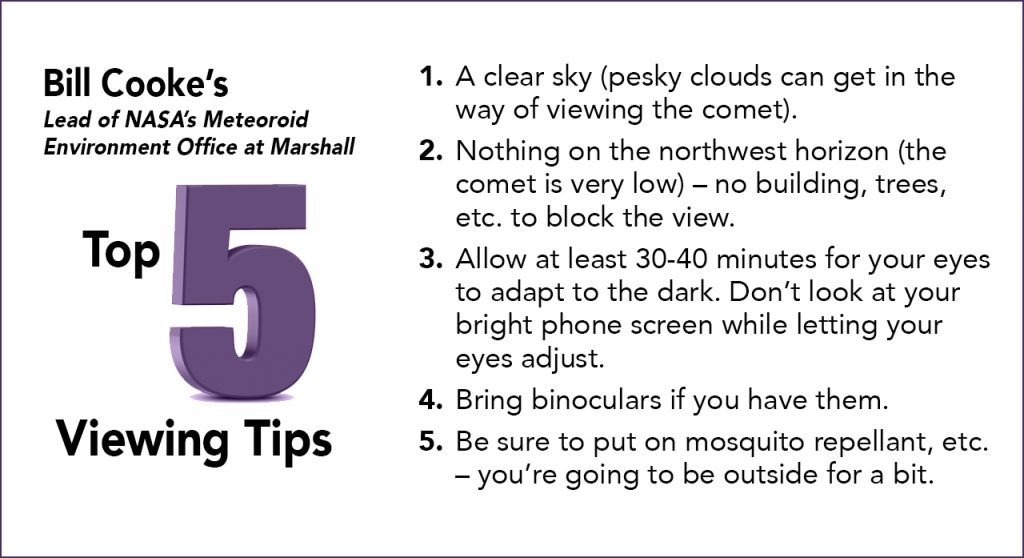 Comet – Made up of ice, dust and gas which form a coma and sometimes a visible tail when it is orbiting close to the sun

Nucleus – The head of the comet, which is made up of ice and frozen gas that vaporizes to form the coma and the tail

Sublimate – The transition of a substance directly from the solid to the gas state, without passing through the liquid state

Magnitude – The units used to describe brightness of astronomical objects. The smaller the numerical value, the brighter the object is

NASA’s Mars 2020 mission is planned to launch this summer, sending the Perseverance rover and the first-ever Mars helicopter to the Red Planet. So, if you’re a Mars exploration fan, this month is a great time to spot Mars yourself. Check out the video below produced by NASA Jet Propulsion Laboratory to learn more.