The sky will put on a show Nov. 11 when Mercury journeys across the Sun. The event, known as a transit, occurs when Mercury passes directly between Earth and the Sun. From our perspective on Earth, Mercury will look like a tiny black dot gliding across the Sun’s face. This only happens about 13 times a century, so it’s a rare event that skywatchers won’t want to miss! Mercury’s last transit was in 2016.  The next won’t happen again until 2032!

“Viewing transits and eclipses provide opportunities to engage the public, to encourage one and all to experience the wonders of the universe and to appreciate how precisely science and mathematics can predict celestial events,” said Mitzi Adams, a solar scientist in the Heliophysics and Planetary Science Branch at NASA’s Marshall Space Flight Center in Huntsville, Alabama. “Of course, safely viewing the Sun is one of my favorite things to do.”

This year’s transit will be widely visible from most of Earth, including the Americas, the Atlantic and Pacific Oceans, New Zealand, Europe, Africa, and western Asia. It starts at about 6:35 a.m. CST, but viewers in some areas, such as the West Coast, will have to wait until the Sun rises at their location to see the transit already in progress. Thankfully, this transit will last almost six hours, so there will be plenty of time to catch the show. At about 9:20 a.m. CST, Mercury’s center will be as close as it is going to get to the Sun’s.

Mercury’s tiny disk, jet black and perfectly round, covers a tiny fraction of the Sun’s blinding surface — only 1/283 of the Sun’s apparent diameter. So you’ll need the magnification of a telescope (minimum of 50x) with a solar filter to view the transit. Never look at the Sun directly or through a telescope without proper protection. It can lead to serious and permanent vision damage. Always use a safe Sun filter to protect your eyes!

Scientists have been using transits for hundreds of years to study the way planets and stars move in space. Edmund Halley used a transit of Venus in 1761 and 1769 to determine the absolute distance to the Sun. Another use of transits is the dimming of Sun or star light as a planet crosses in front of it. This technique is one way planets circling other stars can be found. Scientists can measure brightness dips from these other stars (or from the Sun) to calculate sizes of planets, how far away the planets are from their stars, and even get hints of what they’re made of.

“The second supermoon of 2019 happened Feb. 19. The third of 2019 will happen March 19. But what’s a supermoon? We asked NASA astronomer Mitzi Adams what’s really going on here. Here’s her answer!”

Like the orbits of all bodies in the solar system, the Moon’s orbit around Earth is not circular, it has an oval or elliptical shape, with Earth slightly offset from the center. As a result, there are two distance extremes of each orbit: closest approach, known as perigee, and the farthest, or apogee. When the Moon is at closest approach and within a day or so of being full, it is called a supermoon because the Moon will be at its brightest and largest.

For the supermoon on Feb.19, the Moon will be full only six hours after it reaches the perigee distance of its orbit, making it the brightest and largest full Moon of the year. A supermoon also occurred in January with a slightly more distant perigee, a mere 362 miles (583 kilometers) farther away, but 14 hours after the full Moon. However, January’s supermoon included a total lunar eclipse seen in all of North and South America. The third and last supermoon of the year will happen March 19, when the perigee distance will be reached a day and five hours before the full Moon (see the table below for details).

To watch tonight’s supermoon, or any full Moon, simply look for the Moon to rise in the east as the Sun sets in the west. The Moon will look extremely large when it rises and sets. This “Moon illusion” happens when the Moon is close to the horizon and there are objects within our line of sight such as trees or buildings. Because these relatively close objects are in front of the Moon, our brain is tricked into thinking the Moon is much closer to the objects that are in our line of sight. At Moon rise or set, it only appears larger than when it is directly overhead because there are no nearby objects with which to compare it. You can check this. When the Moon rises, hold a coin at arm’s length so that the coin covers the Moon. Repeat this throughout the evening and you will see that the Moon’s size does not change.

As it rises on Feb. 19, the Moon will be in the constellation of Leo. However, since the Moon is so bright, you may have trouble seeing the bright star Regulus, which is at the end of the “backwards question mark” that makes Leo easy to spot.

Looking more or less directly overhead, you could see the famous constellation Orion the Hunter with bright stars Betelgeuse, a reddish star, and Rigel, a bluish star. With a telescope or binoculars, you might be able to pick out the Orion nebula just below the belt stars of Orion, Alnitak, Alnilam, and Mintaka.

To the west of Orion you should be able to spot reddish Mars.

As we observe this supermoon, keep in mind that 2019 marks the 50th anniversary of a great technological feat ­­– humans travelled to the Moon, walked on its surface and returned safely to Earth. Twelve people walked on the Moon. Neil Armstrong and Buzz Aldrin were the first two, but let us not forget the other ten: Alan Bean, Charles “Pete” Conrad, Edgar D. Mitchell, Alan Shepard, Dave Scott, James Irwin, John Young, Charles Duke, Eugene “Gene” Cernan and Harrison Schmitt. These men, along with the command module pilots Michael Collins, Dick Gordon, Stu Roosa, Al Worden, Ken Mattingly, Ron Evans and the multitudes of support staff back on Earth, fulfilled a dream of exploring our nearest neighbor in space. As NASA and its commercial and international partners plan to return the Moon over the next decade with a long-term continued presence, the list of Moon walkers will surely include women, as well.

A good resource for more information on supermoons may be found here: https://solarsystem.nasa.gov/moons/earths-moon/what-is-a-supermoon/.

Constellation screenshots are from Stellarium, a planetarium software package that is accompanied by a GNU General Public License

Mitzi Adams is a solar scientist in the Heliophysics and Planetary Science Branch at NASA’s Marshall Space Flight Center.

Last August, citizens and visitors to the United States of America had a rare opportunity to see a total solar eclipse, because the path of totality ranged from Oregon to South Carolina, essentially bisecting the country. But alas, the total lunar eclipse happening on Friday, July 27, will totally miss the United States. Being able to observe the Moon totally immersed in Earth’s shadow depends mostly on whether it is dark at the time the eclipse happens, so about half the Earth would be in the right place to see the eclipse, weather permitting of course. This time, residents of Europe, Africa, Asia, Australia, and parts of South America will be so lucky. In contrast, totality for a solar eclipse is very narrow and only a very small portion of Earth is in the shadow of the Moon. For the August 2017 eclipse, only those within an approximately 100 km (63 miles) wide path saw the Sun totally eclipsed.

So what happens when there is a lunar eclipse? Unlike the solar variety, Earth blocks the Sun for a lunar eclipse. For the lunar eclipse to happen, the Moon’s phase must be “full”, which means that the orbiting Moon is opposite the Sun, with Earth in between. When the Sun sets in the west, the Moon rises in the east — and this event happens once a “moonth” (or month). But a lunar eclipse does not happen every month. Why is that?

Well, now we get into more tricky territory. Let’s try a thought experiment. Draw a line between the centers of the Sun, Earth, and Moon. This line is part of a plane that describes how Earth orbits the Sun, called the plane of the ecliptic. The Moon orbits Earth, only its orbit is tilted with respect to the plane of the ecliptic, sometimes the Moon is above the plane, sometimes it is below the plane. Only when the Moon’s orbit lines up with the ecliptic plane do we have a chance for an eclipse. If the phase of the Moon is “full” when this happens, we have a lunar eclipse. If the phase of the Moon is “new,” we have a solar eclipse. Sometimes the orbital planes do not line up exactly, in those cases, we would have partial eclipses.

The July 27 eclipse is somewhat special because the length of totality will be the longest of this century at one hour, 43 minutes. Why? Several reasons. The Moon will be at apogee, or at the farthest distance from Earth (406,000 km or 252,000 mi) possible for our Moon. Objects in orbit around Earth move slower the farther away they are, which means it will take longer for the Moon to traverse the width of Earth’s shadow. In addition, the Moon will be almost exactly on that line that connects Sun, Earth, Moon, also increasing the length of time the Moon will spend in the umbral (darkest) part of Earth’s shadow. Finally, Earth reached its greatest distance from the Sun (aphelion) quite recently (July 6), meaning that Earth’s shadow on July 27 will be close to the largest it can be, adding even more distance (and time) to the Moon’s shadowy traverse.

The partial phase of the eclipse will begin at 18:24 UT, with totality beginning at 19:30 UT (see the NASA time zone page for help with conversion to your local time and official U.S. time). Totality will be over at 21:13 UT and the partial phase ends at 22:19 UT. Viewing a lunar eclipse does not require a telescope or even special glasses; however, while waiting for totality to begin, which is marked by a reddish-brown color to the Moon, a telescope could be used to view two planets that are in the evening sky. Mars will be visible, and should be pretty bright since there is currently a dust storm covering the entire planet. So the telescope will not see any surface detail here, but the redness of the planet will contrast well with the reddish hue of a totally eclipsed Moon. Saturn will be visible to the west of Mars — and even binoculars will resolve the rings, but a telescope could provide more detail. For all observers, find the full Moon in the night sky, Mars will be close to and below (south of) the Moon, a bright reddish “star-like” object. For detailed information about this eclipse, click here. 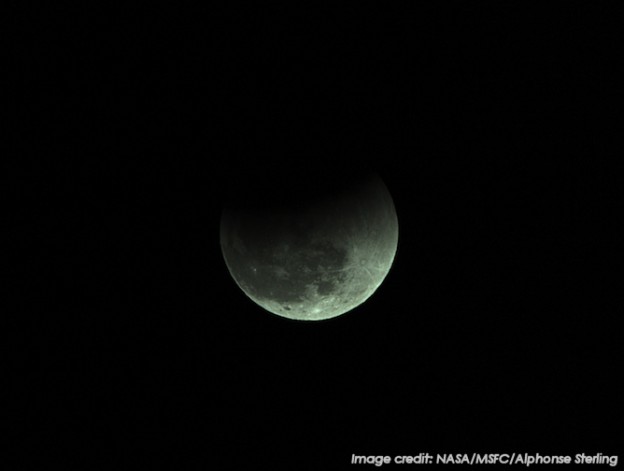