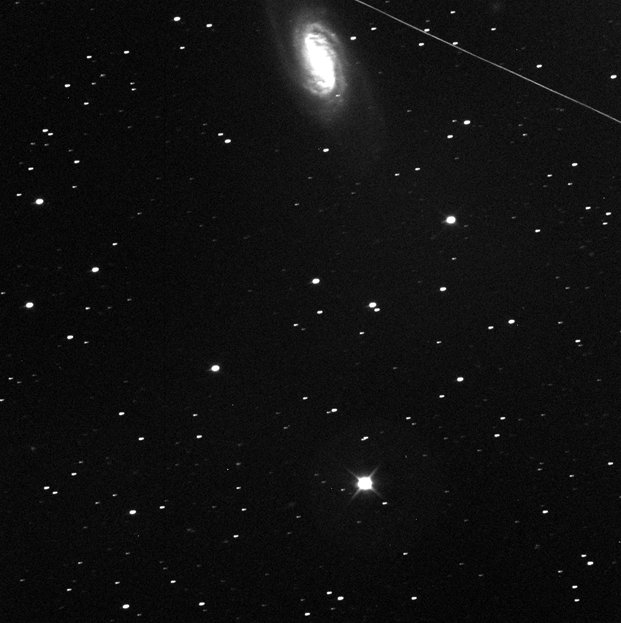 Discovered only a few days ago, the house-sized asteroid 2011 MD whizzed by at only 7,600 miles above Earth’s surface on June 27 at approximately 1:00 p.m. EDT. This approximately 10-yard rock came closer than many communications satellites and will rapidly recede over the next few hours and days. Rob Suggs, operating a Marshall Space Flight Center telescope in New Mexico, captured several images of the asteroid on the night of  June 26.

At the time these 30-second exposures were made, the asteroid was about 80,000 miles away from Earth. At such a close distance, the asteroid appears as a streak due to its motion relative to us, even in a short exposure.

The animation below shows the motion of Comet Ikeya-Murakami on Nov. 13, 2010, captured with a New Mexico-based telescope operated remotely by NASA’s Marshall Space Flight Center. The images were taken near dawn and show the comet’s movement over a period of 45 minutes.  Each exposure was three minutes in length, and the faint angled streak around 0:10 in the animation is a satellite trail. At the time of these images, the comet was some 229 million miles away from Earth.

Comet Ikeya-Murakami was discovered very recently on Nov. 3, 2010, by Japanese amateur astronomers Kaoru Ikeya and Shigeki Murakami. Their discovery is unusual because they both used manual observations through optical telescopes to identify the comet. Such observations are rare in recent times when astronomers use cutting-edge digital imaging to study the skies.

Ikeya-Murakami is classified as a long-period comet, or those comets having eccentric orbits ranging from 200 years millions of years to make one circuit around the sun.