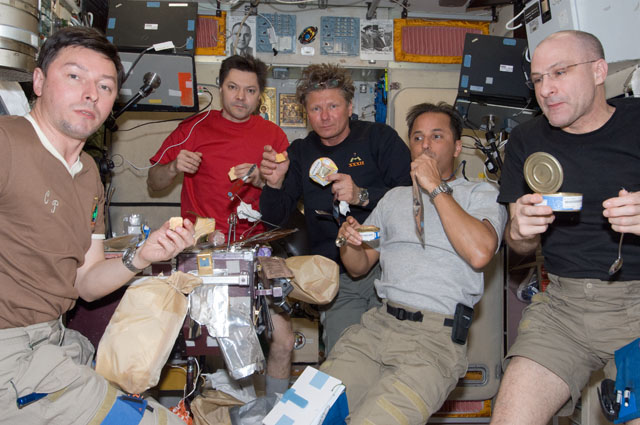 Flight Engineer Joe Acaba (second from right) and his Expedition 31 crew mates share a meal near the galley in the Zvezda service module. Credit NASA

I was wired up last week and I don’t mean with adrenaline or caffeine.  I had the blood pressure cuffs on my fingers (my crew mate Oleg was calling me Robo Joe) and the 10-lead holter monitor on my chest.  The week ended up again with more urine samples and a blood draw.

One thing this week has taught me is my appreciation of sports.  It is not like I did not know that I am a sports fan.  My game room in my house gives me away.  However, I have learned that apart from appreciating the abilities of the players and the complexities of the various sports, I miss the social aspect of the games.  Being from Southern California, I follow the Angels, Lakers, Kings, and Ducks.  My relationship with the Dodgers is complex (a story for another day) and since we no longer have a football team in town I root for the Houston Texans.  As part of our psychological support we get music, movies, books, TV shows, etc. sent up to us when possible.  This week I received an Angels game that was probably a few days old.  It was great.  I could watch an inning or two while having a meal and then maybe a couple more before I went to bed.  It took me about 2-3 days to watch a game and I enjoyed every minute of it.  So what do I miss?  Being a Lakers fan anywhere but in LA is tough, especially in Houston where you have Dallas and San Antonio fans.  I miss the banter with my buddy Rene about which team was going to win when they faced each other (both our teams lost so we would not get the chance this year anyway) and why the players on our teams are far superior than others.  I miss watching an Angels game with my sister – I live in Houston and she lives in Anaheim and yes we call each other after or during the significant events of each inning.  The Kings are in the Stanley Cup Finals and are one game away from winning their first Cup.  How cool would that be?  I can only imagine how my friend Ken is feeling after the last 2 losses. The Heat beat the Celtics in game 7 and will now face OKC.  That is going to be a great series.  Don’t get me wrong.  There is no place I would rather be than working aboard the ISS.  It has just given me an opportunity to reflect on why certain things are important to us.  I am sure those serving our Country abroad, or those stationed in Antarctica or any other remote area have felt the same.  I look forward to the arrival of my crew mate Suni Williams in about a month.  She is a Red Sox fan.  So if you hear anything as the ISS flies over your city, it is probably her and me watching an Angels – Sox game and talking smack over who is going to win.  I think we all know the answer to that one.

21 thoughts on “This Sporting Life”