If you are reading this Blog, then you have an interest in what NASA is doing in preparation for sending humans into deep space to explore, work and live.

Throughout the North American continent and beyond, we have teams conducting what are called “analog field tests.”  The simple definition of the word analog is “something similar or relating to,” which means we are testing in locations that we have found to be similar or related to the surfaces we expect to encounter on other planets or asteroids.

Believe it or not, this testing has been around since the Apollo days and now we are taking it to the next level. 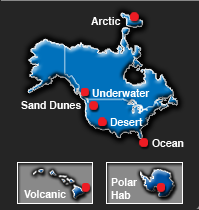 We have teams testing and training next generation vehicles and life systems in the arctic deserts and lakes of Canada; deep beneath the surface of the ocean near the Florida Keys; on the side of a dormant volcano in Hawaii; and in the dry, dusty deserts of Arizona.  Read more about the teams at https://www.nasa.gov/exploration/analogs/.

Each team has a different mission profile but they are all working to better prepare for long-duration spaceflight and long-term stays on surfaces remote and distant from Mother Earth.

Our goal is to give you a close and personal look at each of these tests as they happen and help you connect the dots in what we think is a pretty cool story.  From time to time, different members of different teams will post here so don’t be surprised to see a post from an engineer on the side of a volcano followed by a post from an educator in the desert where we test rovers.  It could be any of us!

The first analog field test of 2010 began on May 1 with the Sea Ice Traverse.  The test is being conducted at Haughton-Mars Project Research Station (HMPRS) on Devon Island, Canada. The high arctic outpost is on the world’s largest uninhabited island. The team faces a challenging journey across 200 km of frigid, snow-covered arctic barrens, including the critical 35 km crossing of rough sea-ice filling the Wellington Channel.

That’s it for now.  More posts to come (and a few below from our previous Desert RATs blog) and plenty more ways of keeping up with our teams at https://www.nasa.gov/exploration/analogs/.