Mission Day 4 EVAs were REALLY cool… In the morning, Chris and Steve braved the stormy seas, and Tom and Andrew followed in the afternoon. We’ve had high waves topside and the crew can definitely feel the movement of the ocean both within the Aquarius and while outside doing their underwater excursions.

The focus of today’s extravehicular activities (EVAs) was to simulate operations with the various mockups that are underwater. One of the mission objectives is to test the size of the mockups, to make sure that there is enough space available for astronauts to move around and do the work that they need to do without bumping into equipment, or having difficulty. Space is a valuable commodity on exploration missions… there must be enough room to allow the astronauts to do their work, but the more space you add, the heavier the equipment and the harder it is to get that equipment off the Earth’s surface and to your destination. We have several mockups underwater that are “volumetric representatives” of NASA’s early surface exploration equipment designs, meaning that they are correct in size and shape: an exploration vehicle, lander, and ascent module. 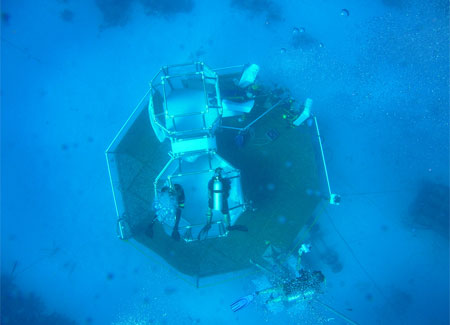 Looking down on the ascent module atop the lander. 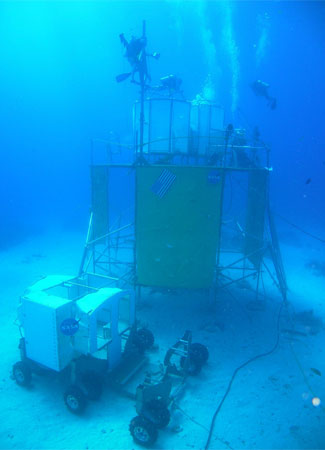 The “volumetric representatives” of the exploration vehicle, lander and ascent module.

This setup allows the crew to move around and work within the mockups to test the operations aspects of our exploration mission activities. The crew commented at the end of the day that these were the most realistic EVAs that they’ve done on the mission so far, and that it really seemed like they were doing exploration activities… how cool!

The Aquanauts worked with the ascent module and airlock mockups, moving between them to evaluate “ingress” and “egress” (how to go in and how to go out), and they moved small payloads into the airlock. They did several tests to evaluate how you would help an injured crewmember get back to safety. They lifted a “crewmember mockup” from just below the lander deck to the lander floor and into the airlock, testing different lifting methods. They did similar activities on the ocean floor, testing how to lift a hurt crewmember up to the rover, ensuring that they could align the life support system with the hatch. 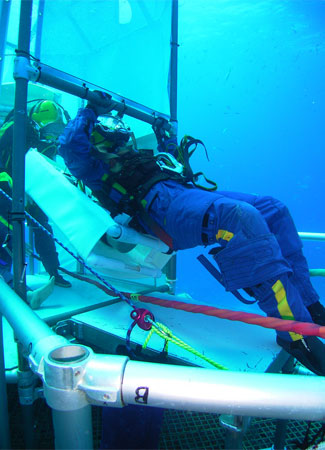 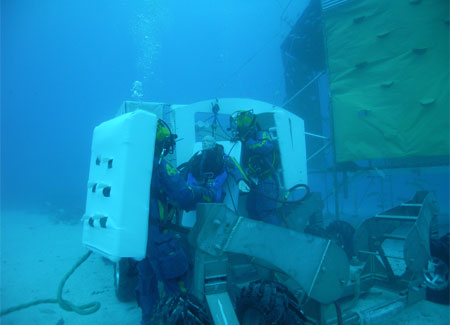 NASA Edge was onsite today and captured a few more interviews with our topside team, and they talked to Aquanauts Andrew and Chris! During Chris’s interview, he was asked about his guitar and his passion for playing. He had a special, collapsible guitar made to take with him during his stay on the International Space Station (ISS)… and he was able to take it on this mission stay, as well. Sounds like the crew may get together this weekend for a rock session.

Have you seen the latest pictures from the NEEMO 14 mission? Check them out on Flickr!