The Northwest Passage Drive Expedition team of six departed Resolute Bay, Nunavut, on 5 May aboard the Mars Institute’s Moon-1 Humvee Rover and two snowmobiles. After encountering several days of immobilizing snowstorms and extremely rough sea-ice conditions, the team finally reached the west coast of Devon Island late in the evening of 16 May. 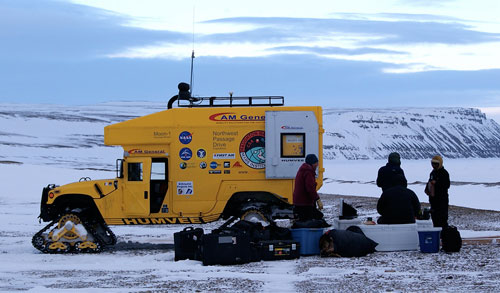 The Mars Institute’s Moon-1 Humvee Rover on solid ground at Domville Point, Devon Island, in the evening of 16 May 2010.
See more photos on Flickr.

“It’s both a great joy and a relief to get our Moon-1 onto solid ground on Devon Island” said Lee. “This final sea-ice crossing was quite a challenge, but we had a fantastic team and vehicle, and we just kept working at it”.

The primary goal of the Northwest Passage Drive Expedition is to transfer the new Moon-1 to Devon Island, a location known to present unique scientific and operational similarities to the surface of the Moon and Mars. There, the rover will be used as a concept vehicle simulating future pressurized rovers to be driven by humans to explore other planetary bodies. The expedition is an integral part of the Haughton-Mars Project (HMP) on Devon Island where research in space science and exploration is being conducted by the National Aeronautics and Space Administration (NASA), the Canadian Space Agency (CSA), the Mars Institute, the SETI Institute, and other partnering organizations.

Last year, Lee’s team logged a record-breaking drive of 494 km in the Moon-1 along a western section of the Northwest Passage, the longest distance ever driven on sea-ice in a road vehicle. This year, the team applied the same winning strategy to avoid the roughest areas of sea-ice along the Wellington Channel. It used a variety of radar satellite remote sensing data and its own surface reconnaissance by snowmobile to find the smoothest possible ice route between Abandon Bay, Cornwallis Island, and Domville Point, Devon Island, where the Moon-1 is now safely parked.

The next step will be to drive the Moon-1 overland to the Haughton-Mars Project Research Station on Devon Island later this summer, where it will be used to begin long-range dual pressurized rover exploration studies.

“The arrival of the Moon-1 on Devon Island ushers in a new phase in our space exploration work that will be critical to enabling humans to explore other worlds sooner, more safely, and more productively” remarked Lee.