The first week of work at Desert RATS started the day after our arrival in Flagstaff on Monday, August 23. The goal of the first week was to set up the base camp and prepare for the testing that will be going on Aug. 31 – Sept 13.

As interns, our main responsibility was to help out where needed. This week was special because our work was very hands-on. We helped move equipment and set up the buildings that the scientists and engineers will work in every day. We also checked out the equipment that the scientists will be using during the tests, practiced setting up the tent that will be used to cover the rover when it rains, moved fences that the rovers will need to go through, and organized the tools and bags the crew will use during their tests. 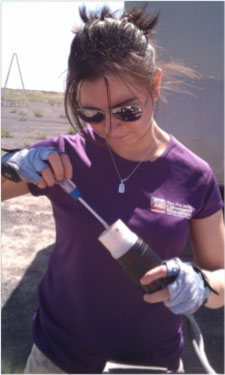 Courtney is helping set up the power cords for the air conditioning in the science connex.

Watching the whole camp come together from a few pieces was exciting, and seeing the scientists and engineers practicing together was a lot of fun.

We are getting ready for the next two weeks when the real testing will start, and things have been going well so far, so we should be ready for mission day one on Aug. 31. As interns we are looking forward to getting to participate in the testing and helping out when we are needed, and we’ll have a lot of fun doing it!