By Scott Bleisath
Scott Bleisath is leading a team of engineers from NASA Glenn Research Center (GRC), who are developing electronics and displays for NASA’s next generation of astronaut space suits.

The Extravehicular Activity (EVA) Power, Avionics, and Software team at NASA’s Glenn Research Center (Cleveland, Ohio) are proud to be participating in Desert RATS 2010. As part of NASA’s space suit engineering team, our role is to develop a suite of electronic tools and applications that will help future spacewalking astronauts work efficiently and autonomously. For Desert RATS 2010, we are testing a prototype EVA Information System (EVAIS). This electronic system is carried inside the astronaut backpacks, used during the daily EVA (spacewalk) excursions performed by the rover crews. The EVAIS works along with a small flat-panel computer display on the astronaut’s wrist, called a cuff display, and a High Definition (HD) video camera mounted on the backpack.

› Learn more about this technology: Watch the NASA EDGE webcast on Friday, Sept. 10, 2010 at 1 pm EDT, featuring an EVAIS engineer!

The EVAIS and cuff display stores and displays timelines, procedures, and maps to the Desert RATS crewmembers. For an astronaut performing a spacewalk, providing access to this type of information is very important. For any exploration space mission beyond Earth orbit, such as missions to the Moon, near Earth asteroids, or Mars, communication with flight controllers on Earth may not be available or may be significantly delayed. The EVAIS enables the crew to manage their activities autonomously.

At Desert RATS, we are learning what is the correct type and amount of information needed by an EVA crewmember. Any electronics going on a spacesuit has to be very efficient from a size, weight, and power perspective. So, we cannot afford to have any “bells and whistles.” Our team spent over a year talking to astronauts and other stakeholders to understand their needs and expectations for our system. They made it clear to us that we cannot bog the crew down with too much information, because that would hinder operations, rather than help.

In addition to displaying information, the EVAIS allows an EVA crewmember to record snapshots and Crew Field Notes (CFNs) with an HD video camera. For geologists, much of the data that they gather, when working out in the field, is their verbal observations being dictated into a tape recorder. Using buttons on the cuff display, the astronaut can activate the camera and built-in recorder to record CFNs. So, the crewmember can gather a rock sample, hold it up in front of the camera, and provide a verbal description. The CFNs are stored on the EVAIS and at the end of the day, they are sent to the science-support team on the ground to analyze.

As the 14-day mission for Desert RATS 2010 is nearing completion, our team is very pleased with the results that we have seen so far. Our system has held up well to the rigorous desert environment. It has been a lot of fun to see our system in use and see how much the science-support team appreciates the geologic data recorded by the EVAIS. We are already thinking about improvements we can make in Desert RATS 2011. 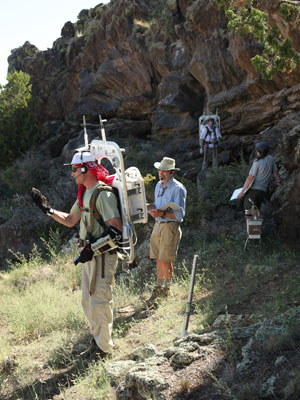 Astronaut Stan Love (foreground left) holds up a sample rock, while recording a Crew Field Note during an EVA. A cuff display can be seen on his left arm. 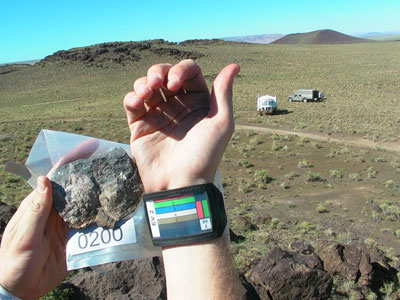 This is an example snap-shot image recorded by the EVA Information System. The image was recorded by Desert RATS crewmember Jake Bleacher. The color chart worn on his wrist helps geologists analyze the rock sample. Space Exploration Vehicle Rover B can be seen in the background.