By José Hurtado
José Hurtado is a geologist, teaching at the University of Texas at El Paso (UTEP). During Desert RATS 2010 he is working in the science back room in week one, and on Space Exploration Vehicle A as the geology crew member in week two.

My name is José Hurtado, and, while I am a geologist and professor in my normal job, for the past three days I am one of two crewmembers on board a prototype planetary rover called the Space Exploration Vehicle (SEV). I’m supporting a week-long mission simulation in the Arizona desert north of Flagstaff that is part of a NASA field test called Desert RATS (Research and Technology Studies). The test has the overall goal of figuring out how to use the SEV for studying geology on another planet. We are doing this in the San Francisco volcanic field, a cluster of volcanoes that have erupted over the past 3 million years and are similar to the types of terrain and geology we hope to someday explore on the surface of the moon or Mars. Our mission is to make observations and to collect samples to help unravel the history of volcanic eruptions in the area.

Our main tool for doing this is the rover itself, which is an incredible machine for fieldwork. In addition to being able to climb over steep, rough terrain, it also has an array of cameras and a bubble window that allow us to get detailed views of the surroundings. It serves as our mobile home and base of operations for performing EVAs (“extravehicular activities”), or spacewalks to make detailed observations. During our EVAs we wear backpacks that simulate the spacesuits astronauts would wear when exploring outside their SEV. The backpacks also have video cameras we can use to share our findings with our colleagues on the science team in “mission control”. Other tools we use are familiar to geologists, including a rock hammer, shovel, tongs, core tubes, and sample bags. We use these to take rock, soil, and sediment samples to bring back to a prototype GeoLab facility at base camp. The GeoLab allows us to make basic observations about the texture and structure of the samples with a microscope and mineral and elemental composition of our samples with an X-ray Fluorescence (XRF) spectrometer.

I have three more days left in my mission before we arrive at base camp for a day of work in the GeoLab. It has been a productive and fun mission so far, and I’m happy to have the opportunity to help NASA plan for future planetary exploration missions! 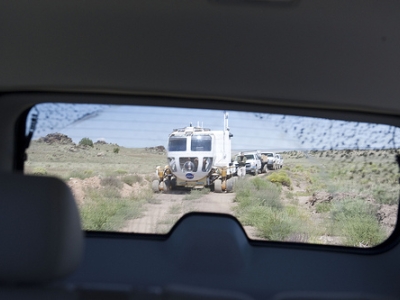 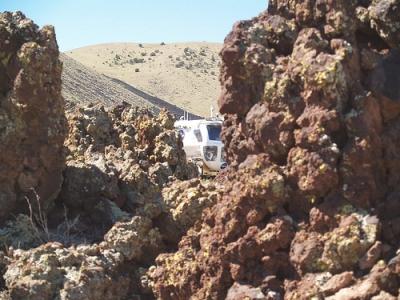 The Space Exploration Vehicle (SEV) moving along the trail is captured on camera from behind rock formations.

One thought on “Desert RATS: Fieldwork With The Space Exploration Vehicle”