Dr. Jim Rice is an Astrogeologist working at NASA Goddard Space Flight Center. For the 2010 Desert Rats field test, Dr. Rice will be the geology crew member on rover A in week one, as well as a member of the science backroom for week 2.

Our field site here in northern Arizona allows one to contemplate our human origins and destiny in a very unique way. Now, allow me to explain. The Black Point Lava Flow, where Chris and I started our 7-day mission in Rover Alpha, is 2 million years old. 2 million years is an interesting number in terms of human origins. While the Black Point Lava Flow was being born and flowing as a river of molten rock and fire, our early ancestors, Homo Erectus, were learning to fashion tools out of rock (some were made of basalt – the very same rock type that is at Black Point) and harness fire for the first time in Africa, the cradle of mankind. This date of 2 million years ago also records the first migration of our ancient ancestors out of Africa and into what is now Europe and Asia.

Now, moving on to another prominent lava flow for this year’s field test, we come to the lava flow from SP Mountain. This flow is 70,000 years old and while this eruption was taking place, halfway around the globe a much larger massive super volcanic eruption was occurring at Toba, in what is present-day Indonesia. This was one of the largest eruptions known in the geologic record. Its prestigious amounts of ash combined with an already present Ice Age contributed to further cooling the planet down. At the same time, the human population had decreased to a dangerously low level of between only 1,000 to 10,000 people worldwide. Modern humans at this time started another mass migration out of Africa that eventually led to the spread of humans across the whole globe that we recognize today.

Flash forward to today, where we are now conducting a manned Planetary Rover field test. It is also interesting to note that the earliest human footprints are recorded and preserved in a layer of volcanic ash, and the Apollo astronauts’ bootprints are also preserved in the volcanic plains of the moon (see photos below). The human race is now on the brink of another major migration – this time it is into the cosmos. I have no doubt that Desert RATS with everyone’s hard labor and long hours is setting the stage for this, the greatest of all human migrations out among the stars. 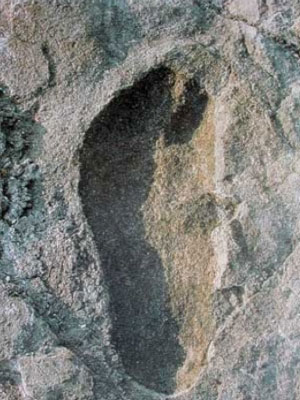 Photo of the earliest human footprint recorded in volcanic ash. 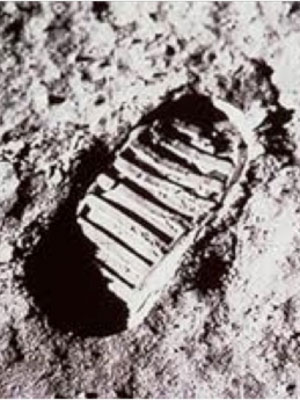 Photo of the first human footprint in lunar soil.