By Dr. Jacob Bleacher
Dr. Jacob Bleacher is a Planetary Geologist working at NASA Goddard Space Flight Center. For the 2010 Desert RATS field test, Dr. Bleacher was the geology crew member on rover B during week one.

One of the great advantages of the Space Exploration Vehicle (SEV) is the ability for the crew to return to a “shirt sleeve” environment (like your living room) inside the rover, to relax between Extra-Vehicular Activities (EVAs). In an earlier blog, Dr. Rice mentioned that the Apollo J-Missions (15-17) brought along a rover. This rover enabled their crew to cover much more ground than the earlier Apollo missions and was a great advance for human exploration of another solar system surface. However, the Apollo rover was unpressurized, meaning the crew needed to be in their spacesuits for the entire time, as they roved the lunar surface.

As I mentioned before, the suitports help us to keep dust out of the rover. They also give the crew a break between EVAs so they do not feel as much discomfort or exhaustion as a result of wearing pressurized suits all day, every day, during a mission. As Dr. Robert Howard reported in his blog, the human factors team is monitoring how tired we become during EVAs and how quickly we can recover while resting inside the rover. During my week in rover Bravo, we went on one EVA for almost 3 hours, as did the crew of Rover Alpha. In the second week, one crew went on two EVAs in one day that were just as long.

I can say, that at the end of my long EVA, I was very happy to return to the rover. After using the suitport to enter the SEV, I was able to change out of my dirty field shirt and into a clean t-shirt. I was able to stretch out without a heavy backpack on and I even stood in front of the air conditioning vents for a few minutes to help me cool off. Although we don’t have much time to “relax” after an EVA (because we need to head to our next site), it is much more comfortable to sit in a clean t-shirt without a backpack on while navigating and driving (and even eating a snack). Due to the ability to take a break between EVAs, the SEV and its suitports make it reasonable for us to plan missions of a month or more, without causing the crew to suffer from exhaustion. 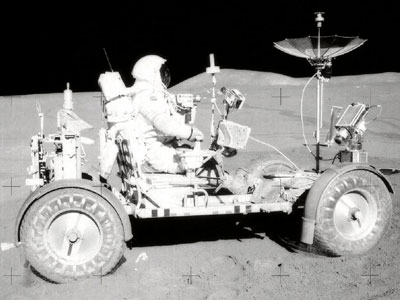 Astronaut David Scott must wear a spacesuit while driving the unpressurized lunar rover on the Apollo 15 mission. 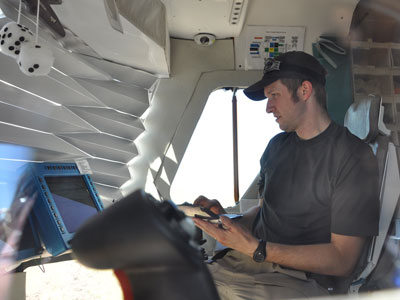 Dr. Jacob Bleacher and the other crew members can work in shirt-sleeves inside the Space Exploration Vehicle.