By Dr. Jacob Bleacher
Dr. Jacob Bleacher is a Planetary Geologist working at NASA Goddard Space Flight Center. For the 2010 Desert RATS field test, Dr. Bleacher was the geology crew member on rover B during week one.

Now that the field test is over, what will our team be doing? Some of you might have heard that one goal of this field test was to experiment with several different operational modes. Two different exploration strategies that we examined included different approaches to using two rovers at the same time, and two different communications capabilities. The two approaches to using both rovers were called “Lead and Trail” and “Divide and Conquer.”

During “Lead and Trail” operations, both rovers and crew operated in close proximity to each other, often exploring similar geologic terrains. In general, the rovers maintained line of sight, but most important was maintaining communications during these operations. If line of sight and communications were lost for a period of time, both rovers were required to return to the last location in which they had communication with the other rover. In general, this resulted in the rovers being no farther apart than 1-2 km.

During “Divide and Conquer” operations, both rovers were free to explore different geologic terrains without maintaining line of sight or as strict communications. This enabled both crews to cover more ground as a team, but should something go wrong, they would be farther apart from each other and less able to help each other out of trouble.

The two communications scenarios that we tested were called “Two-a-day Comms.” and “Continuous Comms.” Together, these two scenarios represent the opposite extremes of how we might set up our communications capabilities for future missions.

During “Two-a-day Comms,” the crew were not in communication with the science backroom or Mission Control during the day. Crew were responsible for making sure that they arrived to predetermined sites, at which our communications hardware would enable us to touch base with the backrooms. As we slept in the rover overnight, the backrooms would work to download all of the data that we had collected the day before. At the beginning and end of each day, while we were still in communication with the backrooms, we would have meetings to discuss what we had seen during the day, and what the plan was for the new day.

During “Continuous Comms,” the crew were able to communicate directly with both Mission Control and the science team at all times. This enabled the science team to keep track of what we had done all day, and took some pressure off of them while working through the night to interpret all of our data.

As you might suspect, each scenario resulted in slightly different outcomes. As we have read already, the Human Factors team was tasked with keeping track of how the crew physically responded to the work environment, which is strongly influenced by these different scenarios. Meanwhile, the Science Team was keeping close track of which combination of scenarios provided the greatest science value.

Now that the test is over, it’s time for the team to evaluate what the outcome was of these different scenarios. Each scenario will also need to be balanced against the cost it takes to make it happen. So, which one was best? What do you think? Stay tuned. You might very well see the answer to that question in the way that our future missions are designed to send humans to the moon and other planets. And you can say you saw it all unfolding when you kept track of the Desert RATS and other NASA Analog Field Tests. 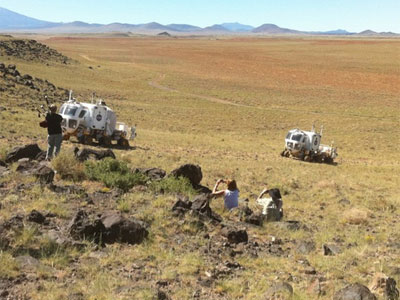 Space Exploration Vehicles A and B come home at the end of the Desert RATS mission.

3 thoughts on “Desert RATS: What now?”