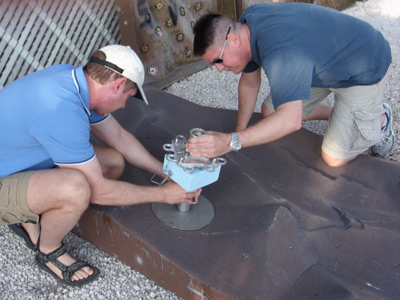 NEEMO 15 support crew setting up devices to be used in the mission.

Today was a busy day in Key Largo, Florida for the support crew of the NEEMO 15 engineering tests. Personnel of NOAA’s Undersea Research Center, or NURC, were busy activating the Aquarius and preparing for this week’s intense diving operations. They left the dock here at the shoreside support facility, aptly named Aquarius Reef Base (ARB), early this morning and were out conducting operations at the Aquarius site, approximately 5 miles south-southeast of Key Largo.

They started up the generators and compressors on the Life Support Buoy (LSB) directly above Aquarius. The LSB has an umbilical directly down to Aquarius to supply it with fresh air, electricity, and communication links. Divers then descended to Aquarius and powered up all the systems and tested the communications equipment in preparation for the week’s upcoming events. NEEMO mission specific tasks were also performed, such as setting up portions of the rock wall, and testing the remotely operated vehicle (ROV).

While all this was going on offshore, the NASA support team was busy onshore at ARB assembling structures to be placed on the seafloor such as mock-ups for the Multi-mission Space Exploration Vehicle (MMSEV) and suit port alignment guides (SPAG), anchoring and tethering devices, translation hardware, and telescoping booms with foot restraint devices. Additionally, they conducted familiarization training on the diving equipment, and checked out equipment to be used on the week’s intense dive operations, to begin tomorrow. Safety briefings were given by the NURC personnel and swim tests were conducted on those dive team members who were either new to the project, or no longer current by NURC’s guidelines. Several runs to the local dive shops and hardware stores were needed to make up for any shortcomings in the original logistics. 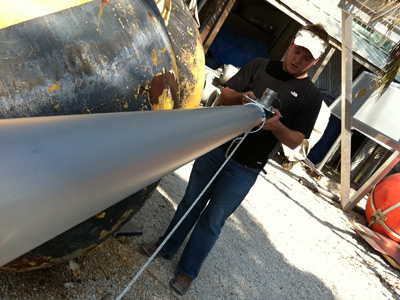 Numerous interviews were recorded with subject matter experts on various NEEMO hardware and ROV operations. An all-hands briefing was held in the evening, going over the day’s accomplishments, and previewing tomorrow’s planned diving operations.