By Allison Bradi – PLPR science lead from University of Calgary 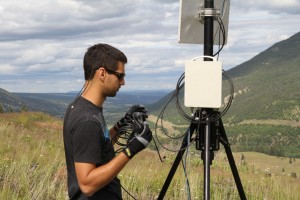 I’m sure many of you have heard the old adage ‘if it ain’t broke, don’t fix it’. Well, sometimes you learn the most when you take something apart and have to put it back together again. We knew that moving to Kelly Lake from Pavilion would provide some challenges and yesterday as our first day of DeepWorker flight operations, we certainly faced a few hiccups. The navigation software had a few bugs and wasn’t talking to the subs. This was problematic as it meant that although we’d still be able to get video from the subs, we wouldn’t be able to track them as they moved around the lake. One of our main goals at Kelly is to map the distribution and morphological variation of the microbialites at the lake and without the ability to track the subs, we wouldn’t be able to identify the location of images that are collected in order to build our map. But, the scientist pilots themselves are also a valuable source of observational information that should not be overlooked and so we decided to go ahead with the flight of at least one of the subs so that we could gather some input about the microbialites and proceed with our science. With that decision made, Sub 7 was away and happily exploring the eastern shore of Kelly Lake. The flight started off under cloudy weather but soon the sun cleared and it must have brought some good luck with it as the navigation software also starting working shortly thereafter and we were able to get tracking for the majority of the flight path. In the end, we didn’t complete our DeepWorker missions quite as planned and Sub 6 was unfortunately not launched. Sometimes science doesn’t go as planned and you need to roll with the punches, we learned a lot and Day 2 of the DeepWorker operations is expected to benefit from these lessons learned and is expected to go a lot smoother. Stay tuned! 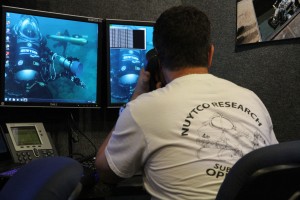