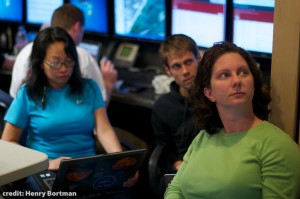 By Jennifer Biddle PhD- Researcher at University of Delaware

I typically do deep sea research, so the PLRP approach of using manned submarines is not too unusual to me. What is unusual is that we’re taking an analog mission approach to the science and exploration – complete with a mobile mission command center. I’ve been really impressed with the amount of infrastructure that the team has had to create in order to do their work, including setting up wifi in remote places and running video feeds across miles. Typically my research done on a ship has communications already on it – we just hop on and do science. Coming to a remote (and beautiful!) site in British Columbia certainly presents challenges.

Today I got my full immersion into PLRP science and headed up the science backroom team for the third dive in Kelly Lake. One disadvantage of a single manned sub is that only one person is seeing and observing things in real time. Maybe they can take a video, but the rest of us might wait hours to see it. That means decisions are slowed and science might be impeded. So this year the team designed a way to have a sub tethered to a cable, sending video feeds to the surface – and then the coms team has been able to shoot video back to the mobile mission command center. What this means is that many of us scientists can sit in comfort and see and hear what the pilot of the sub is observing. That way we can confer on what we are seeing immediately, add extra sets of eyes to a busy pilot and give advice or opinions on what is happening. Really what we did was sit back and go “Cool!” when a lovely microbialite would pop up on the screen.

We additionally got a true mission-feel when we started doing delayed communications. If an astronaut is off of the Earth, it takes a while to talk to them! So even though our sub pilot was only a few kilometers away, we gave ourselves a delay to see how things would go. Not surprisingly, it did seem easier – doesn’t your job go better when your “boss” stops interrupting you? But we’ll see how well it works when we actually want samples. Maybe 10 brains are better than one – maybe not! It’s part of this week’s experiments. My final experiments won’t be done for a while. We are collecting samples from Pavilion and Kelly Lakes to continue to describe the microbial communities that are in the microbialites. My group is specifically interested in the phototrophic (light-harvesting) communities, who we expect are driving the distinct shapes we see in these structures. Our work is in progress, so now updates yet – but watch for later updates as we start to unravel the mysteries of these beautiful and mysterious microbialites! 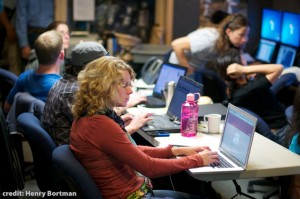