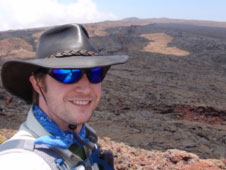 I am a member of Crew B during the 2011 field test, as I was during the 2010 field test.  During last year’s test we used 2 crew’s of 4, driving our two Space Exploration Vehicles (SEVs) to explore the northern Arizona desert. Each crew lived in their respective rover for one week, and the test focused on how to use those rovers and crews to explore (together or separated and exploring different terrain) while in different communications situations (continuous and limited to twice a day) with Mission Control and a Science Backroom. At the end of the test the crews docked with the Habitat Demonstration Unit (HDU), which housed a science laboratory, and maintenance and medical workstations.

During this year’s test we will not be driving the rovers over such large distances, nor will we be living in the rover. Each crew will spend several days living in the Deep Space Habitat (DSH).  The DSH includes the HDU from last year, with the addition of the 2nd floor living habitat or loft, and a hygiene habitat. The addition of these features enable a crew to live in the DSH for significant periods of time. Also added to the HDU this year is a computer console that enables a crewmember to interact with their fellow crew who are in the SEVs.  This is an important position this year for the field geology portion of the test, which will be conducted with a 50 second communications delay between our crew and Mission Control and the Science Backroom (located in Houston this year). This time delay is important to test because if humans explore Solar System bodies beyond the Moon there will be some time delay in communications, which is something that NASA has never dealt with before.  Based on this communications constraint we are testing several operations scenarios using up to 4 crew members divided between Extra Vehicular Activities (EVAs), the SEVs, and the DSH. The crewmember inside the DSH does not have a time delay in communications with the crew in the rovers or on EVA, and has thus far been able to manage communications between their fellow crew and Houston.  So stay tuned, we are testing several exciting new human exploration operations and communications scenarios, and lots of new hardware.