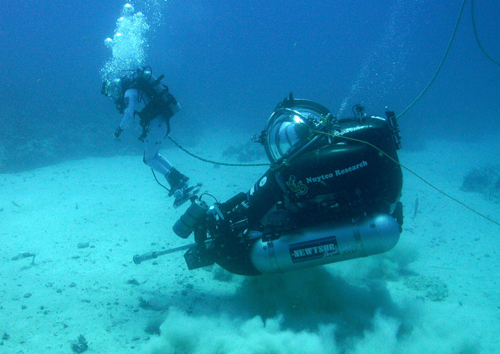 Image at right: Squyres performs an EVA while mounted to a DeepWorker sub piloted by NEEMO Mission Manager Bill Todd.

I was on the crew for NEEMO 15, back in October. It was a great mission, but it got cut short after just six days by a hurricane. (We were bummed, of course, but you don’t argue with a hurricane.) We got a lot of our tasks done, and we learned a lot. But the thing we all wanted to do most — dual operations between divers and submarines — we never got to.

So why do we have submarines down here? The reason is that they simulate small spacecraft that could be used in conjunction with astronauts doing spacewalks at an asteroid. Spacewalks at an asteroid won’t be like spacewalks at the International Space Station… asteroids don’t come with handrails. So one idea is to take a small spacecraft to the asteroid, and let the astronauts fasten their feet to that spacecraft. The pilot in the spacecraft would position the astronaut, who would have both hands free to work on the asteroid.

We tried that today, with Kimiya Yui and me as the astronauts and two small submarines, (with Serena Aunon and Bill Todd at the controls) as the spacecraft. And it worked. I mean, it really worked. The subs fly beautifully. Being mounted out on the front of one and working with the sub driver to fine-tune our path to our next location was drop-dead easy. And then, once we got where we were going, having our feet locked solidly to the sub was a great way to work.

And… I would be remiss if I didn’t say something about the cool factor in all of this. At the start of today’s EVA I was floating above the bottom, listening to the voice communications in my headset and watching for the sub. Slowly, almost imperceptibly at first, I saw the lights coming toward me through the blue mist. It was like being inside a science fiction movie. And then, once we were flying about the surface… man, I’ve never experienced anything like it. You can hang on with just your knees, both hands free like Leonardo DiCaprio in that scene from Titanic. King of world indeed…