Onething we haven’t thought about too much on this NEEMO mission has been theweather and sea conditions. The reason is that they’ve mostly been so good. 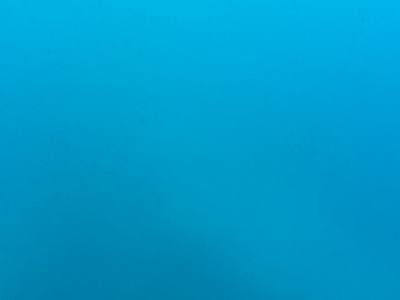 Image at right: Squyres shows the underwater visibility with this image.

OnNEEMO 15, it was another story. The start of that mission was delayed by atropical storm, and we came out of the water early because of an approachinghurricane. The beautiful waters of the Florida Keys, which are known to diversfor their clarity, were a hazy green murk for most of the mission. We got thejob done in the time we had, but it wasn’t always pretty. Sometimes we actuallygot lost out there, trying to find our way through the fog.

Formost of NEEMO 16, conditions have been beautiful. You can see it in thepictures that have been posted online: clear water and good diving.

Well…that has changed a bit in the past 24 hours. I took a picture out the bunk roomwindow right before Tim and I headed out for our afternoon EVA, and you can seewhat it looks like… nothing but blue fog. The visibility is maybe 15 feetnow, and I think that’s being generous. 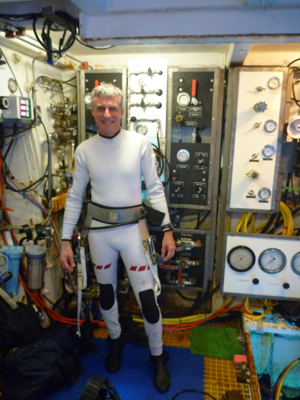 Imageat right: Aquanaut Steve Squyres in the wet porch of the Aquarius habitat.

Badvis is only part of the story. The real issue is the strong winds and big wavestopside. We can’t really see that from down here, but we can feel it. Thenumbers we’ve been hearing are 25-knot winds and 6 to 8-foot seas… seriousbusiness in a small boat. Down here we feel the “surge” a bit as thehabitat shifts position slightly, and the popping of our ears as each big wavepasses overhead. Up top, though, our hard-working support divers are pitchingand rolling in big waves for hours at a time, needing all the care they canmuster just to get in and out of their dive boats. Difficult stuff.

Thegood news is that the bad conditions aren’t keeping us from getting the jobdone. We’ve been down here more than a week, and I think we could almost findour way around out there with our eyes closed now if we had to. The surge movesus around a bit during our simulated spacewalks, but not enough to make adifference. If conditions had been like this right out of the gate, I think itwould have been a bit of a challenge. But with nine days under our belts, we’reable to keep on keepin’ on.