Decompression is a strange experience. It happens at the end of every mission at Aquarius, and it’s happening to us as I write this.

One of the many ways in which life in Aquarius is like life in space is that you can’t just go home when you want to. In space, the reason is obvious… you’re in space. In Aquarius, the reason is less obvious, but just as important. If you simply swim up to the surface after a stay in Aquarius, you’ll get what divers call “the bends”. 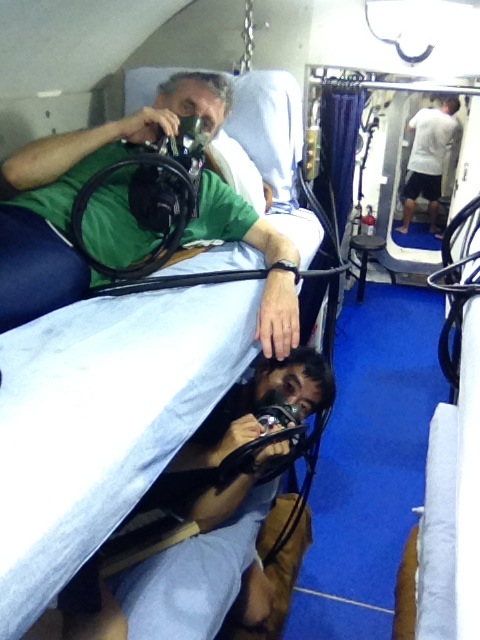 Down here in the habitat, the atmospheric pressure is two and a half times higher than at the surface. We keep it that high to keep the water out — the pressure of the air prevents water from coming inside.

The inconvenient thing about living at that pressure, though, is that it forces a lot of nitrogen into your body. Air is mostly nitrogen, and at that pressure the amount of nitrogen that works its way into your body tissues is substantial. Come to the surface very slowly, and you’re fine… the nitrogen can leak out slowly and safely. Come up fast, though, and it’s like opening a bottle of soda… bubbles of nitrogen form in your blood. And that can be very bad news.

To ascend safely from Aquarius takes about 18 hours, which is an impractically long time to be moving up through the water column in dive gear. So what we do instead is seal the habitat up tight, and then slowly pump air out, reducing the pressure bit by bit. Over 18 hours the pressure goes slowly down to normal surface pressure.

As I write this, it’s about 10:30 PM on mission day 11. The gauge in the habitat says that we’re at a pressure equivalent to 18 feet of seawater. By 7:45 tomorrow morning, that’ll be down to zero feet, and we’ll be ready to go to the surface safely.

Except for one thing — we won’t be able to open the door.

With low air pressure inside the habitat, the enormous pressure of the seawater outside holds the door firmly shut. The only way we can get out is to bring the pressure back up to what it was before decompression… a process called “blowdown”. Blowdown is quick. The air valves are opened, the air rushes in, and before long things are back to normal. It’s noisy, too.

And then it really is time to go. Once blowdown has happened, all that nitrogen that was so carefully purged from our bodies begins to leak back in again. So at that point it’s like a fire drill… out to the wet porch, into our scuba gear, and up to a waiting dive boat in just a few minutes. It’s a strange experience.

And then we’ll be able to see the sky again, for the first time in almost two weeks. That will be strange too.