NASA is actively planning to expand the horizons of human space exploration, and with the Space Launch System and the Orion Multi-Purpose Crew Vehicle, humans will soon have the ability travel beyond low Earth orbit. But before we send humans to explore deep-space destinations — like near-Earth asteroids, the moon, and Mars and its moons — we need to demonstrate and refine capabilities here on Earth. 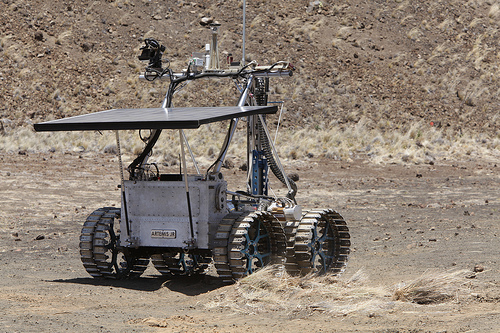 Each potential destination contains a vast spectrum of resources that space architects, engineers, and mission planners can work into spacecraft designs and operations to make a mission more safe, cost-effective, and efficient. Harnessing local resources is a practice called In-Situ Resource Utilization (ISRU), and it offers very attractive benefits for human space exploration, including mass reduction for the payload – and therefore cost reduction, since the number of launches will be fewer and size of launch vehicles could be smaller. ISRU also reduces risk for crew members, increases mission flexibility, and encourages commercialization of space by blazing a trail and demonstrating a market that is waiting to be cornered.

But What Would We Mine at Each Destination?

Earth’s moon offers four major resources. The regolith, or layer of loose soil overlying rock beds, has a rich mixture of oxides and metals. The lack of atmosphere on the moon exposes the regolith to solar wind volatiles, including hydrogen, helium, and carbon. And recent robotic missions have proven that the shadowed polar craters have water-ice. NASA and its partners have already demonstrated the technology and proven the capabilities necessary to harness all of these resources for sustainable human exploration of the lunar surface.

Near-Earth asteroids present a unique challenge for space explorers. There are several types and classes of asteroids and the compositions vary greatly; some are very iron-rich, with magnesium, nickel, water, rare platinum groups, and varieties of silicates, while others will be rich with oxygen, water, and other volatiles. The rotation and spin rates can be erratic and unpredictable, making anchoring and mining precarious for humans. During the past two NEEMO analog missions, astronauts practiced different navigation and translation techniques for asteroid exploration, including human-robotic sampling and translation techniques in which the astronauts could deploy robotic systems to mine the asteroid resources.

The red planet’s atmosphere contains 95.5% carbon dioxide, 2.7% nitrogen, and 1.6% argon. We know from the Spirit and Opportunity rovers that water concentration varies by location, but we have proof of significant ice beneath the regolith at the poles. Mars also has oxides and metals in the soil, making it yet another resource-rich destination that we hope one day will be home to humans.

Could Planetary Resources Really Sustain Humans Away from Earth?

Robotic precursor missions can help prepare an extraterrestrial destination for a long-duration human visit. A system the size of RESOLVE, mounted on a rover like the Canadian Space Agency’s (CSA) Artemis Jr., would be used to locate resources that could be used by the crew for life support, protection, power, and propulsion.  With the information, another small rover and processing plant can be delivered to mine an area less than 1 inch deep the size of a soccer field for one year prior to humans arriving in order to have enough initial resources to sustain a crew of astronauts when they arrive. If we had a shorter precursor timeframe, the robotic hardware would have to be much bigger in order to produce and store an initial repository of consumables for when the astronauts arrive. Another advantage of early robotic deployment, also known as a robotic precursor mission, is that it enables us to do more science experiments to learn about the area before the astronauts get there.