Although we are living and working within the Multi-Mission Space Exploration Vehicle (MMSEV) located within the Building 9 hi-bay of the Johnson Space Center (JSC), you would never know it from our perspective inside the vehicle. Our view out the windows of the MMSEV is a fantastic representation of the asteroid 25143 Itokawa. Surrounded by a high-resolution video wall that displays the asteroid in front of us, we are totally immersed in this simulated environment. Here inside the MMSEV, we use the displays, controls, and views out the windows to operate the vehicle within this amazing environment. One of the other great aspect are the sounds; not only are we surrounded by the whirl of electronics and communication systems, we can hear the simulated thrusters firing outside as we maneuver the MMSEV.

What’s really remarkable is that the shape, motion, and imagery of the asteroid Itokawa that we see out our windows are all derived from actual mission data from the Hayabusa mission. This spacecraft, developed by the Japan Aerospace Exploration Agency (JAXA), launched in 2003 and arrived at Itokawa in 2005. After a few months in orbit surveying and studying the asteroid from a distance, it landed and collected samples which were returned to Earth in 2010 (for more information on the Hayabusa mission see the JAXA website). Some of those samples returned from the surface of Itokawa are now located at JSC, just a short distance from where I currently sit in the MMSEV. For its support of the Hayabusa mission, NASA will eventually receive approximately 10% of the returned samples; the first 15 particles were delivered in late 2011. This material is curated at JSC and made available to the scientific community for research (get more information on these samples and their curation at JSC). 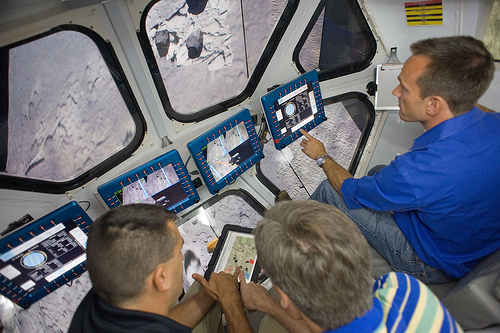 Itokawa is a stony (or S-type) asteroid that is shaped sort of like a potato. Its length is approximately five football fields long; the actual dimensions are 535 x 294 x 209 meters. It has been described as a rubble-pile, and looking at it from our view in the MMSEV I can see why. It has a very rough rocky appearance with many large boulders perched on the surface; there are also a few areas where it appears smooth. From the data collected during the Hayabusa mission, we know that Itokawa has a low bulk density and high porosity – indicating that it is likely made up of material previously broken up by other asteroid impacts that loosely reformed to make Itokawa as we see it today. 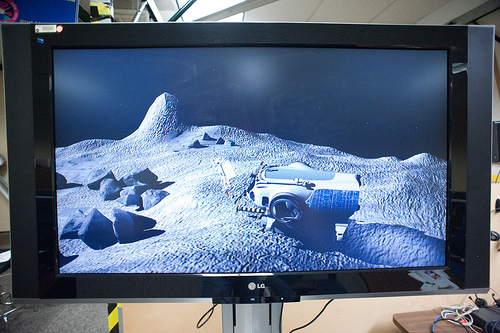 Exploring and learning about an asteroid utilizing data from a robotic precursor spacecraft, as we are during this year’s RATS test, is exactly the strategy that we would likely use to eventually send humans to an asteroid in the future. This analog test and others like it are a great step in achieving that goal. As great as this view is today within this simulation, the view and knowledge we would get from sending humans on an actual mission to an asteroid in the future will be spectacular.