Mission Day 2 was an exciting day for the pilot in all of us. We changed plans up from our usual days of collecting rocks out on a “spacewalk” (Extra Vehicular Activity or EVA) to do some more challenging flying tasks. Our new mission today was to pilot the Multi-Mission Space Exploration Vehicle (MMSEV) down to several different asteroids that spin at a variety of rates. These asteroids varied from relatively easy, slowly spinning objects to ones that moved at rates such that the ground seemed to whiz by quickly underneath the spacecraft. 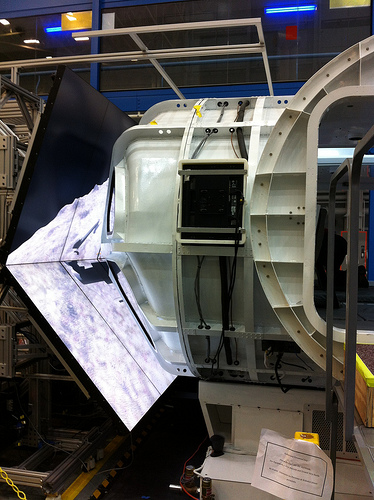 The Multi-Mission Space Exploration Vehicle (MMSEV) viewed from outside during the RATS simulated mission; video screens in front of the MMSEV windows project images of the asteroid as crew members pilot the MMSEV. Photo credit: NASA

Once we rendezvoused with our target on the ground, we had to manually pilot the MMSEV to station keep, or in other words hold the spacecraft in one small spot such that an EVA crewmember on the end of the arm could collect samples. Our station keeping goal was to keep the spacecraft to within a half meter of a given location. While that may sound easy, when the ground is moving quickly under you in unexpected directions, and you have limited visual cues out the windows, it becomes challenging to hold position in one spot. This is made even more complicated by trying to maneuver the spacecraft manually in all six axis (forward/back, left/right, up/down, roll, pitch, and yaw).

Once we completed our planned flying evaluations, we even had the opportunity to try out some potential techniques for holding the MMSEV steady at a worksite. This technique had us use a telescoping pole (‘stinger’) sticking out the front of the vehicle to help ‘stick’ us to the ground. Basically, we flew the MMSEV directly at the asteroid and pushed the ‘stinger’ into the ground, using light thrust to keep it buried. In theory, this would help us stay in one location, though the asteroid rotation rates made it challenging to stay balanced on our spacecraft sized pogo stick. But, it all made for a fun and exciting of day of piloting on an asteroid.