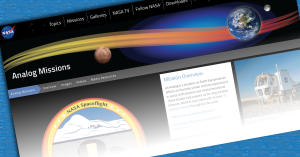 NASA’s Human Research Program launched Phase 1 of the NASA Analog Missions website, a site devoted to studies around the world that help prepare for long duration human spaceflight. With the website launch comes the resurrection of the NASA analogs blog, renamed “AnaBlogs.”

An Analog is a situation on Earth that produces affects on the body similar to those experienced in space, both physical and emotional. The site, www.nasa.gov/analogs is a one-stop website for all analog missions linked to NASA.

How real is an analog mission? Andy Self, Flight Analog Project operations lead at the Johnson Space Center (JSC) in Houston explained, “When we set up an analog research investigation, we try to mimic as many spaceflight conditions as possible. Obviously, they are not in microgravity, but confinement and the stress that goes along with spaceflight can be mimicked.”

NASA is associated with at least 15 analog missions throughout the world, including Antarctica, Germany, Russia, Canada, Florida, Houston, and Hawaii. The new webpage gives an overview of the analogs, including a description of the habitats and the types of research conducted, along with a link to each analog mission.

The Human Exploration Resource Analog (HERA) mission site shows a 360-degree photo of the outside and inside of the HERA habitat which is located at JSC . It also has photos from previous missions and tweets from current missions.

Details as to how to apply to be a crewmember, or test subject, for an analog research mission may be found on the “Want to Participate” page on the website. Researchers can find links to calls for research and instructions on how to submit proposals on the “For Researchers” page.

Future phases of the Analog Missions webpage will give more details for each analog, more 360-degree experiences, and more history and education on analog missions.

NASA’s Human Research Program enables space exploration by reducing the risks to human health and performance through a focused program of basic, applied, and operational research. This leads to the development and delivery of: human health, performance, and habitability standards; countermeasures and risk mitigation solutions; and advanced habitability and medical support technologies.